The Passage of Time -- Or Books Don't Always Age Well

I'm currently reviewing the audio file for Settling the Score, one of my earlier books, one I'm quite proud of, and a 2012 Lambda Awards finalist. The narrator is awesome, with a great sense of comic timing, but in listening to this book, I have found a few things cringe-worthy. The book contains elements that mark it as a seven-year-old book.

While the mention of a telephone answering machine isn't really too outdated, especially since lead characters Joey's family lives simply, and don't necessarily keep up with technology, it still stood out for me.

Another statement that shows the story's age is Joey's sister's plucked eyebrows, which are no longer the fashion. Love interest Troy's Jaguar also has a CD player, which would work if it's a classic car. Troy uses an iPod, but seeing as he's technologically challenged, that could still work too.

Who knows? Maybe I'm the only one who'll notice because I know it's there. 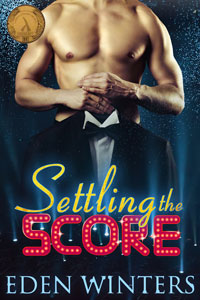 Outed and dumped on national television by his rising star boyfriend, Joey Nichols must face the bigotry of the locals in his small Southern town alone. His dreams of a happy ever after lie crushed at his feet.
Novelist Troy Steele has an axe to grind against Hollywood heartbreaker types. Transforming Joey into a gorgeous, unobtainable hunk would be payback worthy of Troy’s poison pen. It’s a brilliant way to get back at Joey’s image-obsessed ex-boyfriend and the movie producer who’s mutilating Troy’s novels.
What begins as simple revenge may tangle them together in something far more complicated. Living well may be the best revenge, but Troy and Joey could rewrite that to loving well.
Posted by Eden Winters at 6:35 PM