There's a new member of the Rocky Ridge Books family: Edie Sommers, whose very first novel will publish September 15th. Saying Yes is the story of one woman who finds herself falling in love with two brothers.

This is also a departure for Rocky Ridge, in that it will be the first het title they've published, and began as a challenge for the author to step outside of her comfort zone and write something other than her normal M/M romances. 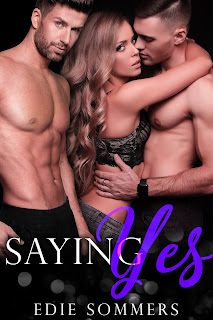 Cassie:
My next-door neighbors, hotter than hell Jack and quietly luscious Andy, have a parade of women coming by, but fire up the grill for hotdogs with me. I'd take one of them in a heartbeat, if they'd ever ask. Or both—a girl can dream.
What did I ever do to wind up in the friend zone?
Now the guys want to change that, want me to date both of them and decide which one I want to keep. Easy enough right?
There’s a slight problem. They’re twins, and choosing one might mean losing the other as a friend.
And I love them both.

Jack:
Cassie caught my eye the day she moved in next door. She's funny, sweet, and sexy, the kind of woman you can take bowling one day and dancing the next. There’s only one thing keeping me from pursuing more than friendship with her: my brother wants her too.

Andy:
Even with the flu Cassie manages to be gorgeous, and it’s sheer torture to live next to her, see her day after day, and resist taking her into my arms and kissing her senseless. We read the same books, and although I’m not much of a talker, somehow she breaks through my defenses. I’ve never met anyone I wanted more. Jack and I finally realize that we risk losing her if we don’t tell her how we feel, and leave the decision up to her which one of us she wants.
Would it be possible for her to want us both?

As you might have guessed, Eden Winters and Edie Sommers are one and the same, just different names to delineate my M/M romances from this new venture. Saying Yes began about six years ago, and took that long to flesh out. Yes, Lucky from Diversion kept commandeering my time.

Look for Saying Yes by Edie Sommers releasing from Rocky Ridge Books on September 15. For you Kindle Unlimited readers, this will be a KU title, and is currently available for pre-order.
Posted by Eden Winters at 11:46 AM