I'm pleased to announce that I've teamed up with voice actor Darcy Stark, an amazing talent who'll bring many of my characters to life.

Highway Man is one of my earlier, shorter works, heavily inspired by the video of The Magnetic Fields' song Papa Was a Rodeo. I first saw the video when it was linked on a blog I followed, and the blogger said, "Someone should write a story for this song."

I did. In three days while snowed in. Yes, that happens in the south sometimes. The story originally released as an 8,000 word short from Torquere Press, but when rights returned to me I added back everything I'd had to take out to reach the word limit. It's now right at 15,000 words, and better captures the tale.

If you're familiar with song and/or video, you'll recognize components in the story. There's even a disco ball!

This is my first collaboration with Darcy, but certainly won't be the last as he's voicing Bo and Lucky and the whole Diversion crew. The entire series. I couldn't be happier.

You can find Highway Man at Audible, here: 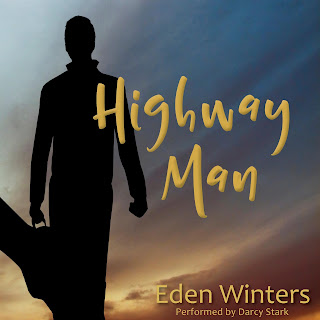 Killian Desmond's dreams died in a flash of pain and the scream of twisted metal. He lost it all the night a tour bus sailed off a mountainside, sending his band-with his brother-to their deaths. Killian is dead too, if the papers are to be believed, and living a half-life of odd jobs, rodeo rides and pick up gigs. The road that once meant freedom is now Killy's exile. No strings, no ties, no names for the one-night stands. Answering a tribute band's ad thrusts him face to face with his past, and into the arms of the one man who just might understand.
Posted by Eden Winters at 6:35 PM