When I finished book nine of the Diversion series, I thought I was finished with Bo, Lucky, and the Southeastern Narcotics Bureau. Then a friend asked, "What happened to Jerry from Corruption?"

Good question, which I hopefully answered in my latest offering, Petty Crimes. Although it's a spin-off story of the Diversion series, and has some of the same characters, it's intended as a standalone.

Jerry has turned his life around, and now works for Lucky at the SNB. Imagine answering to a boss who literally shot you. I truly enjoyed showing Lucky through the eyes of someone else. 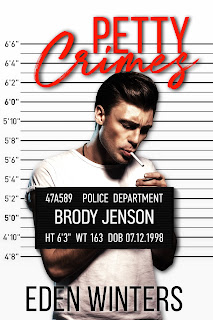 Why can't life give him a break?Five years ago, Jerry Wilkerson was running with a biker gang, making mistake after mistake, till he ended up in the hospital with a gunshot wound, facing criminal charges for drug distribution. On top of everything, he'd fallen in love with the narcotics agent who took them all down. Or rather, with Cyrus Cooper, the man that agent pretended to be.Making a deal with the Southeastern Narcotics Bureau kept Jerry out of jail, sending him undercover as Brody Jenson, a petty criminal able to get into places other agents can't. He's satisfied with his life—or would be if he wasn't still longing for someone who never existed.Then a man steps out of his dreams and into his life, who's everything Jerry ever wanted.Except for the part where Jerry might have to arrest him.
Petty Crimes is now available for preorder at Amazon, releasing October 1, in time for GRL!