New Addition to the Household

My husband and I have a small herd of goats, and this past month has been kidding season. Most of the babies did fine with their mothers, but we had a tragedy too.

One poor goat gave birth to four tiny babies. We thought they were all dead until one moved. We brought him into the house, cleaned him, wrapped him, then tried to get milk from the mama for his feeding, as he was too weak to stand and nurse.

That's when we found the problem. Mama goat was sick, so we wound up caring for her, and keeping the baby in the house since there was no way she could tend him. He woke me up the first few nights for feeding, but then we got into a routine. He's now a week old, and I think it's safe to say he's out of the woods. He's still tiny, much smaller than the goatlings born after him, but he's sassy and healthy and bouncing everywhere, as kids are bound to do.

I've posted a few videos on my Facebook page of the cute things he does. We named him Squeaker for the little noises he makes.

Goats aren't solitary creatures, so I occasionally bring in another kid for play dates and watch them bounce, headbutt each other, and try to climb anything in sight.

I know one day he'll be old enough to join the herd, but for now? He's my little house goat.

I think everybody needs one. 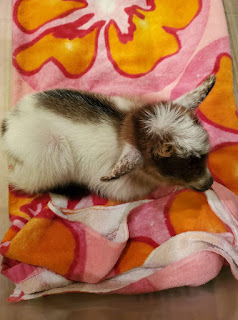