Several years ago I found myself in a car with other authors, going to an event. I recounted the story about how a possum moved into the walls of my house, and how I came up with a concept for a book about possum shifters.

Some shouted out ideas like, "Oh! When he sees a dog, he has to fall over", "he freezes when a car approaches", and other possum behavior.

The result is Naked Tails, about a man who doesn't know his destiny, and an old friend who helps guide him. Definitely a friends-to-lovers story.

The novel published a year later, but the contract has expired and the book rights returned to me. The story hasn't changed, I just brushed up a word here and there, and it has a new cover. In speaking of this book, I'm surprised at how many people tell me they've never heard of it.

So, if you missed it the first time, it's back! (In my head that sounded like The Terminator, just so you know.) 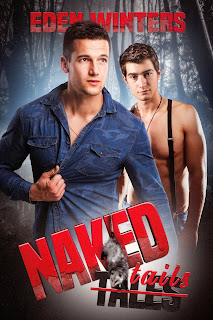 Seth McDaniel wasn’t raised among a shifter passel and has no idea what it’s like to turn furry once a month. An orphan, torn from his father’s family at an early age, he scarcely remembers Great-aunt Irene. Now her passing brings him back to Possum Kingdom, Georgia, to take up a legacy he doesn’t understand and reconnect with a friend he’s never forgotten.As Irene’s second-in-command, Dustin Livingston has two choices: assume control of the passel or select another replacement. Unfortunately, the other candidates are either heartless or clueless. Dustin’s best hope to dodge the responsibility is to deliver a crash course in leadership to his childhood pal Seth, a man he hasn’t seen in twenty years. However, while Dustin's mind is set on his task, his heart is set on his old friend.Seth’s quest for answers yields more questions instead. What’s with the tiny gray hairs littering his aunt’s house? Why do the townsfolk call each other “Jack” and “Jill”? Do Dustin’s attentions come with ulterior motives? And why is Seth suddenly craving crickets?


You can find Naked Tails at Amazon.
Posted by Eden Winters at 10:34 AM