I am thrilled to announce that Decision (Diversion 8) is currently on pre-order at Amazon. This was a hard book to write, dealing with some pretty tough topics. Lucky is Lucky, but Bo finds that, to do the right thing, he might have to bend a few rules. Although the story is told from Lucky's POV, Bo definitely grows a lot here, and our guys move one step closer to their HEA.

All your favorite side characters are back too: Charlotte, Loretta, Walter, and the others who've wormed their way into Lucky and Bo's circle. Plus, get ready to meet some new folks in the Diversion world. 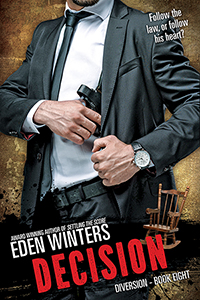 By-the-book Bo Schollenberger’s training to be the new boss at the Southeastern Narcotics Bureau. He’s always been the moral compass for his partner Lucky Lucklighter, or Simon Harrison, or whatever-the-hell his name is this week.

Lucky might have read the book, or parts of it, but toes the line between legal and… not so legal.  A little moral elasticity lets him out-maneuver the bad guys. It’s not broke, why fix it?

They butt heads at work, but they’re rock solid at home, where their biggest concern is when, or if, they’ll become parents.

Their latest case puts them in a tailspin when drugs flood a local high school and someone hands Lucky’s nephew a vial of pills like they were candy. Unravelling the drug ring leads them straight into a nest of human trafficking, way outside the jurisdiction of the SNB, but no way could Bo and Lucky let the perpetrators leave Atlanta scot-free. No one gets away with harming innocents, especially family.

The letter of the law says to trust the legal system, but doing the right thing might lead them outside the lines.