Had your eye on the Diversion series but haven't given in to temptation yet? Now might be the perfect time. Until October 21, Diversion Box Set Vol 1 is on sale at Amazon and B&N for the bargain price of $1.99. 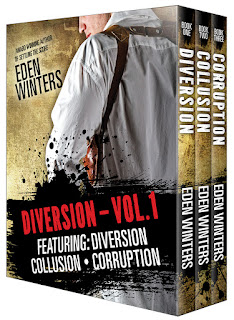 This volume contains Diversion, Collusion, and Corruption of the Diversion series.

Diversion:
There are good guys, bad guys, and then there’s Lucky.

Two men. Close quarters. Friction results in heat. But Lucky scoffs at partnerships, no matter how thrilling the roller-coaster. Bo has two months to break down Lucky’s defenses… and seconds are ticking by.

Pick up your copy today at Amazon or B&N.
Posted by Eden Winters at 4:16 PM