I devour audio books, going through several each week, so I love a good audio book sale. That's just what you'll get with the Diversion Box Set Vol. 1, Diversion, Collusion, and Corruption all in a package deal for one credit or $20.96. 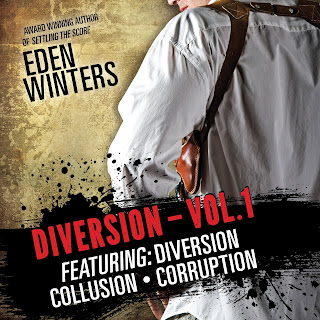 Diversion:
There are good guys, bad guys, and then there’s Lucky.
Former drug trafficker Richmond “Lucky” Lucklighter flaunts his past like a badge of honor. He speaks his mind, doesn’t play nice, and flirts with disaster while working off his sentence with the Southeastern Narcotics Bureau. If he can keep out of trouble a while longer he’ll be a free man - after he trains his replacement.

Two men. Close quarters. Friction results in heat. But Lucky scoffs at partnerships, no matter how thrilling the roller-coaster. Bo has two months to break down Lucky’s defenses...and seconds are ticking by.

SNB Agent Bo Schollenberger’s solved his cases using his brains and not a gun, and with his partner, not alone. Now he’s handed a tough new case involving designer drugs that turn users violent. One false move could end his life as he immerses himself into a motorcycle gang to locate the source. His fate depends on how well he can impersonate someone else. Someone named Cyrus Cooper.
Cyrus is everything Bo Schollenberger isn’t, including the badass enforcer for a smuggling ring. He establishes pecking order with his fists and doesn’t take shit from anybody, not even the undercover agent who comes to help his case.

Get your copy today at Audible.
Posted by Eden Winters at 8:42 AM