If you've been thinking about starting the Diversion series, but have been procrastinating, now might be a good time to follow through.

Diversion Box Set, Vol 1 is now available at Amazon! That's right, the first three installments, Diversion, Collusion, and Corruption, are compiled into one for the bargain price of $8.99. 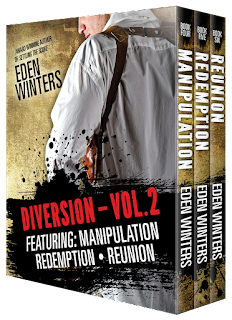 There are good guys, bad guys, and then there’s Lucky.

Two men. Close quarters. Friction results in heat. But Lucky scoffs at partnerships, no matter how thrilling the roller-coaster. Bo has two months to break down Lucky’s defenses… and seconds are ticking by.

Renegade biker. Drug runner. Recovering addict. Wanted by the Southeastern Narcotics Bureau. But he isn’t a crook, he’s the law. SNB Agent Bo Schollenberger’s solved his cases using his brains and not a gun, and with his partner, not alone. Now he’s handed a tough new case involving designer drugs that turn users violent. One false move could end his life as he immerses himself into a motorcycle gang to locate the source. His fate depends on how well he can impersonate someone else. Someone named Cyrus Cooper. Cyrus is everything Bo Schollenberger isn’t, including the badass enforcer for a smuggling ring. He establishes pecking order with his fists and doesn’t take shit from anybody, not even the undercover agent who comes to help his case. Simon “Lucky” Harrison’s always been the best, whichever side of the law he was on. Former trafficker turned SNB agent, he damned well ought to be undercover in this motorcycle gang, instead of hanging around the office going crazy with new policies, new people, and “inter-departmental cooperation” that sticks him in a classroom. Yet he’s passed over for the SNB’s biggest case in decades in favor of the rookie who shares his bed. A man Lucky thought he knew.When survival depends on a web of tangled lies, lines blur, worlds collide, and a high stakes game turns friend to foe. Lucky knows the difference between Bo the agent and Cyrus the outlaw, but does Bo?


Get your copy at Amazon.
Posted by Eden Winters at 4:46 PM