The result was A Bear Walks Into a Bar, a fun shifter romp. Well, my pal P.D. Singer liked the story enough that she wanted to revisit the characters--as an MPREG. Our first collaboration resulted in Two Bears and a Baby.

Now both works have been bundled together as a boxed set, available through Amazon. Two action-packed shifter adventures for one low price. 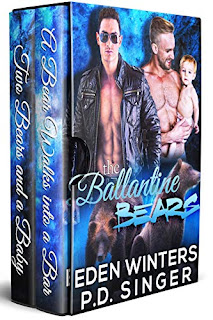 It takes one strong alpha with a tight grip to keep a mountain full of shifters under control. Sawyer Ballantine’s contending with an uppity wolf leader and a herd of shifter elk bound and determined to take over. He might be the lone bear on the mountain, but he’s not going to allow another four shifters to just move in, especially not when they whiff of power. They’ll either be his in all ways, or they’ll be gone.
Dillon, Jerry, Kevin, and Brad have no one but each other since their groups kicked them out. The young bear, wolves, and fox make a merry ménage, pooling their meager skills and serving beer. They’ve stumbled into more than they understand, caught in the dispute between the Urso of Ballantine Mountain and the elk. But winter’s setting in, and they don’t know how to keep Dillon safe for hibernation.
And then a bear walks into their bar.
Two Bears and a Baby
The Urso of Ballantine Mountain intended to run a ragtag bunch of shifters out of his territory. Instead, Sawyer Ballantine found his mate. Once the lone bear on the mountain, now Sawyer shares his life and bed with Dillon, who’s still learning how to be a proper bear. Sawyer tells the stories of the First Bears, from whom all other bear shifters descended, but how did two male bears become the fathers of many?
The varied shifters of Ballantine Mountain coexist peacefully—Sawyer manages them with an iron paw. Yet danger lurks. The wolves have plans of their own, and they don’t include taking orders from bears.
Two bears, seven wolves, no contest.