Today I'm honored to present a guest post from a marvelous author and friend, Michael Rupured, telling us about his newest novel. I've been a fan of his ever since I read Until Thanksgiving and Whippersnapper.

He's also great company on road trips. So please welcome him to the blog! 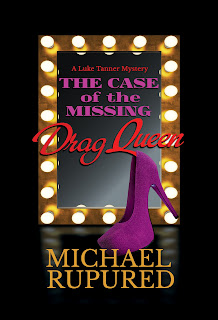 The Queens of the Gilded Lily

The Case of the Missing Drag Queen is a lighthearted mystery set in 1982. Much of the action takes place at the Gilded Lily in Lexington, KY where our hero, Luke Tanner, tends bar for drag shows every Thursday, Friday and Saturday night. Writing a story set in my hometown with a large cast of drag queens was almost as fun as a good drag show.

I’ve seen hundreds of drag shows and watched thousands of drag queens perform since my first trip to a gay bar in 1979. The venues ranged from a cleared dance floor for shows in smaller clubs to the showroom at the Connection in Louisville with a grand stage and theater-style seating for several hundred. Talented performers who really know how to put on a show were the inspiration for the queens of the Gilded Lily.

Ruby Dubonnet, the headliner at the Gilded Lily, is the Pride of the Bluegrass. She’s a seasoned professional with a huge following and a penchant for highly dramatic performances. Nothing is the same after she disappears.

Pixie Wilder, the Trailer Park Fairy, takes Ruby’s place as the headliner. She’s tiny for a guy and a bit of a redneck with a thing for rhinestones, short skirts, and country music. Some of Ruby’s loyal fans think Pixie is behind Ruby’s disappearance.

Simone (the Dirty Duchess of Broadway) and Kitty Galore (Queen of the Cathouse) round out the cast of regular performers at the Gilded Lily. Guests include Cammie Towers (Sophisticated Lady), Mimi Von Sant (Madame on a Mission), and drag king Butch Manley (Man About Town). More stars come out for the big Halloween bash.

Luke Tanner, our reluctant hero, doesn’t want to get involved. Pixie talks him into helping her clear her name. The harder he tries to walk away, the deeper he gets sucked into The Case of the Missing Drag Queen.

Broke, saddled with a mountain of debt, and dependent on his Aunt Callie's support, aspiring writer Luke Tanner has returned to Kentucky to put his life back together after a failed five-year relationship.

On his twenty-fifth birthday, Luke meets diminutive Pixie Wilder, a long-time performer at the Gilded Lily. After headliner Ruby Dubonnet doesn’t show up, Pixie takes her place as the star of the show—a motive that makes her a suspect in Ruby’s disappearance.

Luke reluctantly agrees to help his new-found friend clear her name. He and Pixie set out to find the missing drag queen, and in the process, put themselves in danger.

Author Bio
Michael Rupured writes stories true enough for government work about gay life from the 1960s to today. This life-long Southerner was born in Fayetteville NC, grew up in Lexington KY, and after 18 months in Washington DC, moved to Athens GA where he’s lived since 1999. By day, he’s senior faculty in the College of Family and Consumer Sciences at the University of Georgia. He’s an avid fan of the Georgia Bulldogs, the Kentucky Wildcats, and any team playing the Florida Gators. In his free time, Michael tinkers with his garden, plays with Toodles (his diabetic chihuahua), and keeps up with his many friends around the country. Previous novels include Until Thanksgiving (thriller), No Good Deed (mystery/thriller), Whippersnapper (regional), and Happy Independence Day (historical). Visit his website (http://rupured.com), follow on Twitter @Crotchetyman), like his Facebook page (https://www.facebook.com/AuthorMichaelRupured/)  or shoot him a message (mrupured@gmail.com)