What Happens When Friends Write Together.... Two Bears and a Baby

Ever since P.D. Singer challenged me to write The Telling, we've been each other's critique partners and held each other's hands throughout this adventure that is writing. We've long discussed collaborating, but it never seemed to happen.

She enjoyed the characters of A Bear Walks Into a Bar, and in conversations, we discussed, "What if?"

The result is our first shared novel, Two Bears and a Baby, featuring the shifters of Ballentine Mountain, with cameos from some of the Possum Kingdom, GA crowd of Naked Tails. 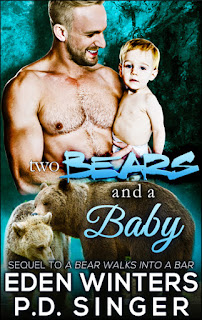 A bear walked into a bar—and found a family.

The Urso of Ballantine Mountain intended to run a ragtag bunch of shifters out of his territory. Instead, Sawyer Ballantine found his mate. Once the lone bear on the mountain, now Sawyer shares his life and bed with Dillon, who’s still learning how to be a proper bear. Sawyer tells the stories of the First Bears, from whom all other bear shifters descended, but how did two male bears become the fathers of many?


The varied shifters of Ballantine Mountain coexist peacefully—Sawyer manages them with an iron paw. Yet danger lurks. The wolves have plans of their own, and they don’t include taking orders from bears.

If Dillon didn’t heave every time he smells bacon.

Available for preorder at Amazon.
Posted by Eden Winters at 5:01 PM