Folks have been asking me when the sequel to The Angel of 13th Street will be released. I'm happy to say that I now have a date for Fallen Angel's return: February 27.

The story is currently available for pre-order at Amazon, and guess what? From now until the release day, you can reserve your copy for $2.99. On release day the sale ends and the price will be $4.99 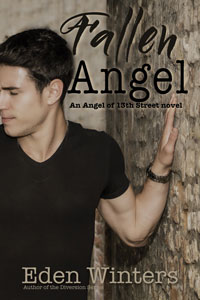 Who can save the rescuer of lost souls?

For ten years ex-rent boy Noah Everett has fought the good fight, offering second chances to those still in the life. Now he’s cracking under the stress. What began as a two-man mission is now going corporate, meaning rules, regulations and inexperienced volunteers needing guidance in a field Noah makes up as he goes along. Who can he turn to when his mentor’s strength is all but gone and his lover is leaving for college—possibly for good?

Four years at State with a full ride scholarship will launch Jeremy Kincaid’s future, but his present includes Noah, Doc, and the closest he’s ever had to a family. And a meth addict who’s become Jeremy’s own personal mission.

An attack sends Noah spinning out of control. Jeremy has to find the way to reach Noah before the man he knows and loves disappears forever.