A Matter of When - Character Introductions - Colton Ferguson

With less than a week until A Matter of When's release, it's time to introduce another character.

Henri Lafontaine's comeback to rock stardom hinges on him picking the right members for his new band.

Colton Ferguson was a fun character to write. Heavily influenced by his adoration of Bruce Lee, he comes to rehearsal still dressed for the dojo, and attended his band audition in an "Enter the Dragon" T-shirt. And what better song than "Kung-Fu Fighting" to showcase his keyboarding skills? Oh, and he draws runes on himself before shows.


And he's got a twin brother. Mr. Clean Living is the perfect foil for recovering party boy Henri, and Colton declares, "My body is a temple." A martial arts enthusiast, he swears to protect Henri from a crazed stalker fan.

Learn more about Henri Lafontaine and his band on Monday, September 15, when Dreamspinner Press will release A Matter of When.

Until then, the story is now available for preorder at Dreamspinner, Amazon, and All Romance Ebooks. 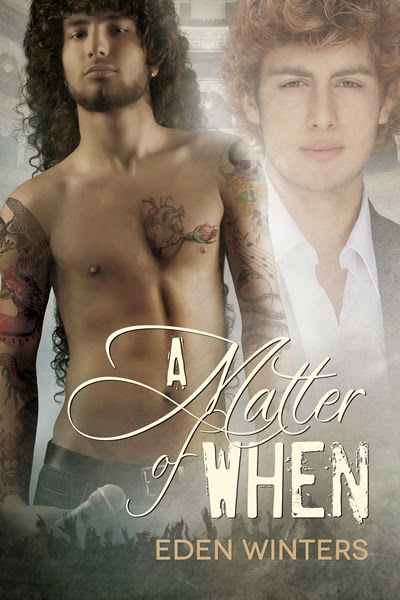 Sebastian Unger’s rich, classically trained tenor inspires wicked thoughts. More than a pretty choir boy, he cracks the whip without hesitation to drive tattooed bad-boy Henri to give his all to his music. Working, fighting, and finally establishing a fragile peace, they find inspiration and perhaps more in each other. But the clock is ticking. Time will pull Henri back to the grit and gold of LA’s mean streets and fame machine, while Sebastian must return to the opera circuit, where a mysterious man known as “the patron” holds far too much sway. Only the trust they've built on a handful of notes bridges their two worlds...and shields them from malice.
Posted by Eden Winters at 5:29 PM