Christmas in July from Dreamspinner Press

It's Christmas in July at Dreamspinner Press! Throughout the month of they'll be featuring books for .99 cents.

Today it's my pal P.D. Singer's "Fire on the Mountain", a tale of adventure and discovery in the Colorado Rockies. Hot firefighters! Woot! 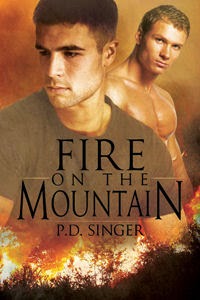 Take a break from academics, enjoy the Colorado Rockies, fight a fire now and then. That’s all Jake Landon expected when he signed up to be a ranger. He’ll partner with some crusty old mountain man; they’ll patrol the wilderness in a tanker, speak three words a day, and Old Crusty won’t be alluring at all. A national forest is big enough to be Jake’s closet—he’ll spend his free time fishing.

Except Old Crusty turns out to be Kurt Carlson: confident, competent, and experienced. He's also young, hot, friendly, and considers clothing optional when it’s just two guys in the wilderness. Sharing a small cabin with this walking temptation is stressing Jake’s sanity—is he sending signals, or just being Kurt? And how would Kurt react if he found out his new partner wants to start a fire of a different kind? Jake’s terrified—they have to live together for five months no matter what.

Enough sparks fly between the rangers to set the trees alight, but it takes a raging inferno to make Jake and Kurt admit to the heat between them.


Keep watching, because there will be plenty of marked down books. On July 26th look for my own "Duet", featuring love in the Scottish Highlands. 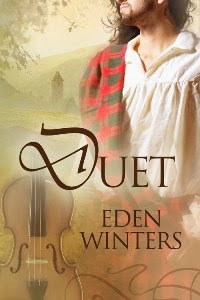 A conqueror’s decree can’t separate Aillil Callaghan from his Scottish heritage. He wears his clan’s forbidden plaid with pride, awaiting the day he becomes Laird, restores his family’s name, and fights to free Scotland from English tyranny. An Englishman in his home? Abomination! Yet the tutor his father engaged for Aillil’s younger brothers may have something to teach the Callaghan heir as well.

Violinist and scholar Malcolm Byerly fled Kent in fear, seeking nothing more than a quiet post, eager minds to teach, and for no one to learn his secrets. He didn’t count on his charges’ English-hating barbarian of an older brother, or on red-and-green tartan concealing a kindred soul. A shared love of music breaks down the barriers between two worlds.

Aillil’s father threatens their love, but a far more dangerous enemy tears them apart. They vanish into legend.

But the Lost Laird knows his own.
Posted by Eden Winters at 11:41 AM