New Release, A Review, and a Giveaway for Almost Mine

Time and familiarity sometimes blinds couples to each other, until they no longer see their lover as who they are now, focusing more on who they used to be. They grow apart. Then, one day, they find find themselves alone.

That's the predicament of Ian and Travis in Almost Mine. They've lived a wonderful life together, raised a son, and now the son has left the nest to start his own life. What's a couple of empty-nesters to do?


Ian’s world turned upside down the day Travis walked out without so much as a word, or even a backward glance, leaving a lonely Ian to wonder why. Their son implores him, “Please go see Dad.”


Two years of hurt leaves Ian ready to confront the man who’d broken his heart, but what if everything he’d believed about their failed romance turned out to be wrong? What if the biggest problem in Ian’s marriage was…Ian? 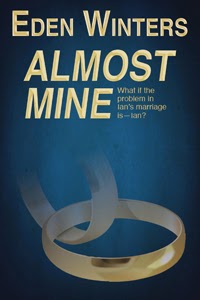 “Just go see Dad, okay?” Bobby, excuse me, Bob (can’t have a doctor named “Bobby,” now can we? Though to me he’ll always be Little Bobby) stared at me with the same puppy dog eyes once employed to con me out of cookies. Now he tried to con my sanity from me.

“And why should I?” I huffed a breath into my tea to hide my agitation. Anyone else I’d tell to go fuck themselves. Even with my hardhearted reputation in a courtroom, I’d never say those words to my child.

Something flickered in Bob’s blue eyes, hidden when he shifted his gaze to stare down at the table. “He’s… he’s not doing too well.”

My resolve to not give a damn wavered. “Is he sick?”

“No. Not sick. He’s just… not really happy these days, I guess. Nothing physically wrong.” Bob shrugged. “Just… not right.”

Oh, not sick, just unhappy. I’d stopped giving a damn (or pretended to) the moment Bob’s other father had waltzed out of my life, giving up a comfortable life with me to go find himself or some such. Good luck with that. “I don’t see how his well-being is my concern, since he obviously wants nothing to do with me.” I pulled my bitterness tightly around me. It provided no warmth, but we’d become inseparable companions of late.

For an aspiring doctor, my son argued better than many attorneys of my acquaintance, presenting hard evidence. “He’s still your husband.”
And for the life of me I couldn’t recall why. I kept telling myself that the next week I’d file the necessary papers—as I’d done every day for the past two years. “A technicality easily enough resolved.”

Time to break apart the Sanders-Robinson hyphenation and become Ian Sanders and Travis Robinson once more. The product of twenty years of my dream life sat across the table from me, waiting to pounce on my words. Part of my dream had included Travis and I enjoying another twenty or thirty years of affluent empty-nesting. Talk about a rude awakening—that future was gone, and for reasons I’d not worked out. Over and done. Time to move on.

Until now I’d convinced myself I simply didn’t want to have to change my name on my driver’s license and passport, and that’s why I hadn’t officially ended my marriage. I’d never quite gotten the knack of believing my own lies.

Our son—yes, he’d always be our son, not Travis’s, not mine—gasped at my words. Whatever’d held his attention on the table seemed forgotten in favor of skewering me with his dagger-sharp gaze. “You’d divorce him?”

I set my cup down, lest he notice the trembling in my fingers. “I should have long before now. You know it. I know it. He wants no part of me.” The twisting behind my sternum must’ve been indigestion. Perhaps I’d eaten my baguette a bit too fast.

The conversation died, awkwardness casting a pall over our breakfast. Snippets of conversation floated our way from nearby tables in the café. Across the aisle two thirtyish men sat with a young boy of about seven. They tried to project a casual air of good friends, but I knew what to look for. One man spread jam on the child’s bagel, while the other wiped a butter smear from a chubby cheek. A family, enjoying breakfast before sending Junior off to school.

If time suddenly turned back, that image of domesticity would have been Bob, Travis, and me, only Travis would’ve handled both butter and jam duties, allowing me to read my morning paper. What a well-oiled parenting machine we’d been. Only, he’d done the parenting. Neither he nor Bobby had seemed to mind the arrangement. Had I ever wiped butter from Bobby’s cheek, or smeared jam on bread? A sudden flash of envy spiked my heart. Oh great. Now I’ve turned into a jealous old man, missing his glory years.

Watching a scene ripped straight from my past caused clouds to gather in the normally sunny eatery. Bob tapped his fingertips against the marble tabletop. Like two gunslingers in a Western movie, we each waited for the other to draw. Bob flinched first, as he always did when discussing his other father. But it wasn’t Bob that Travis had walked out on. Bob had been away at college when the fabric of our family unraveled. “You do know what tomorrow is, right?” my son finally ventured.

How could I not remember a date that had set me back quite a few thousand dollars and replayed itself in my head on a far too regular basis? I might not tell Bob to mind his own business or lie to him outright, but evasive answers didn’t count as lying in my book. “Friday?”

“Besides that.” When I didn’t waltz into his trap he snorted out a breath. “Your anniversary. Your twentieth anniversary.”

Lucky from Mrs. Condit and Friends Read Books awarded the story Five Sweet Peas. Not only did they review the book, they're hosting a giveaway for an e-book copy. Find out what Lucky had to say, and enter for a chance to win, here.

Almost Mine is available at Amazon and All Romance.