Good morning, y'all! Today I have Mickie B. Ashling back with Ride-Off, the follow-up to her phenomenal Fire Horse. 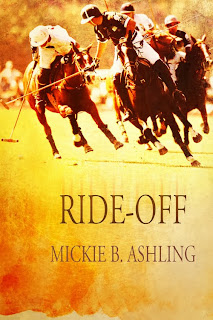 Mickie B. Ashling is the alter-ego of a multifaceted woman raised by a single mother who preferred reading over other forms of entertainment. She found a kindred spirit in her oldest child and encouraged her with a steady supply of dog-eared paperbacks. Romance was the preferred genre, and historical romances topped her favorites list.
By the time Mickie discovered her own talent for writing, real life had intruded, and the business of earning a living and raising four sons took priority. With the advent of e-publishing and the inevitable emptying nest, dreams were resurrected, and the storyteller was reborn.
She stumbled into the world of men who love men in 2002 and continues to draw inspiration from their ongoing struggle to find equality and happiness in this oftentimes skewed and intolerant world. Her award-winning novels have been called "gut wrenching, daring, and thought provoking." She admits to being an angst queen and making her men work damn hard for their happy endings.
Mickie loves to travel and has lived in the Philippines, Spain, and the Middle East but currently resides in a suburb outside Chicago.
You can contact her at mickie.ashling@gmail.com or leave a comment on her website at http://mickieashling.com or her blog at http://mickiebashling.blogspot.com.

Finally reunited, Preston Fawkes and Konrad Schnell put family and
obligations aside, preferring to remain in seclusion on Ned’s estate
to get reacquainted. Unfortunately, reality can only be held off for
so long, and they return to Texas to reclaim the life they put on
pause. Trying to strike the right balance between business, family,
and romance requires ongoing effort, and the challenges begin shortly
after they arrive.

At the top of the list is Bandi, Konrad’s son, and his desire to play
polo. A close second is Conrad “Sasha” Fawkes, Preston’s actor son
who’s struggling to succeed on Broadway. And last, but certainly not
least, is Paloma, the fiery Argentinean beauty Preston sired after a
passionate tango.

Blending the interests and needs of three grown children is difficult
at best and almost impossible when agendas collide and old secrets are
unearthed. The situation comes to a head when the family gathers in
San Antonio for Thanksgiving, throwing Preston and Konrad into a
maelstrom they must weather as best they can, or they’ll face a major
ride-off that could throw the game before it even starts.

When Monica had first broached the subject of their son’s orientation eight years ago, he’d been surprised. Preston hadn’t been around enough to see Con heading in that direction, so he’d assumed, like everyone else, that he was straight. He was certain his own father, John Fawkes, had blamed him for somehow influencing the boy, which was the furthest thing from the truth. Preston wouldn’t wish his lifestyle on anyone, let alone his son, but fate had other plans for the boy. Being a long distance dad hadn’t let him off the hook though, and Monica Dearest had insisted they have “The Talk.” It would go down in the annals of history as one of the worst moments of his life, and considering the kind of life he’d led up to that point, it was momentous, to say the least.

“Mom thinks you and I should have a conversation,” he’d started, stepping into Conrad’s lair when he was barely thirteen. Looking around the untidy room, he noticed the posters of Queer As Folk covering one wall. One character in particular, some brunet with water dripping down his naked chest, looked particularly fuckable and Preston had to admire his son’s taste. He’d do that guy in a minute.

Con looked at him innocently. “What about, Dad?”

Preston pointed at the poster. “You think about him when you jerk off?”

Preston chuckled. “Sorry… that didn’t come out right, did it?”

If Conrad’s eyes had gotten any larger, they’d have fallen out of their sockets. “This is so gay, Dad.”

“Nothing like getting right down to the subject at hand,” he’d replied. “Let’s talk gay, son. How far have you gotten in terms of exploration?”

“I don’t know what you’re talking about,” Con replied primly.

“Alright,” Preston said. “If you want to play stupid, I’ll go along. Do you like boys or girls?”

“None of your business!”

“Unfortunately, it is,” Pres sighed. “My job is to make sure you’re playing it safe at all times. Answer me, Con. Boys or girls?”

“Boys,” he’d confessed reluctantly. “But I know everything, Dad. There’s nothing you can say that I don’t already know.”

“Is that right?” Preston said, dismissing the preposterous claim. He stared at the computer on Conrad’s desk and wondered if he’d ventured into the gay websites yet. Hell, he, personally, hadn’t even known they’d existed until recently. The Internet was just starting to change the world, and he knew it would be a while before the connections were up to speed on the ranch, so perhaps the boy was still in the dark. Then again, he might know it all, just as he claimed. So long as one had a credit card, which Conrad did, he had access. Gay sex, or any sex for that matter, was readily available with the click of a mouse. Nonetheless, he’d signed on as his dad, and had sworn to keep him safe, no matter how ridiculous or redundant it might seem. He knew that Konrad would have demanded that he sit the boy down and list in graphic detail every goddamn disease known to man. It was what he’d done when Pres was a young and precocious kid, so he’d closed his eyes and pretended he was Konrad Schnell for the next half hour. By the time he’d finished his dissertation on the perils of bed-hopping, young Conrad looked like he was going to puke.

“Info dump?” he’d asked, feeling rather sick himself. It was always a mystery how he’d managed to stay healthy considering his checkered past.

Con shook his head. “I guess I didn’t know it all,” he admitted. “Thank you for telling me.”

Back in the present, he felt a prickly beard tickling his ear and turned toward Kon, who asked, “What’s troubling you?”

“We should have stuck to Andalusians.”

They had matching wedding rings made of Spanish sterling silver and the sight of them always reminded Preston that they had been given a second chance and for that he was grateful. “We’re doing much better this time around,” he said softly.

“I know,” Kon replied, lifting Preston’s hand for a kiss. “I wish Sasha had a better role in this play.”

“Isn’t there anyone you know who could give him the break he needs?”

“Not in this field.”

“I think it’s time to issue an ultimatum.”

“These things take time, Flea. Some people aren’t as lucky as others.”

“That’s bullshit and you know it. He needs to be more aggressive and not expect the plum roles to fall into his lap like magic.”

“What are you going to do?”

“I’m cutting him off after Christmas. He’s got three months to prove he can do this or he comes back home and starts to earn his keep.”

“Let me know when you’re planning to talk to him. I want to be as far away as possible.”

“Like I said,” Kon rumbled, “count me out of that conversation.”

“I’ll wait until we’re ’bout ready to board the plane.”