The Telling 2nd Edition - Now Available at All Romance eBooks

Has it really been four years since The Telling made its way from my laptop and into ereaders? My, how time flies. Back then I would have loved to have had a print copy of my very first published book, but even my publisher at the time was doing limited print versions. Wow, what a difference the years have made. Now, books are available in multi-format, and print on demand has changed publishing.

Along with industry changes, I've grown as a writer, and hopefully, a recent editing class left me better able to do justice to Michael and Jay's story. The Telling 2nd Edition is now available at All Romance eBooks, in MOBI and EPUB formats, and will soon be joined by PDF and print. So many readers have asked for print copies, and soom they'll be available.

The story is the same, with a lot of tightening and editing, the cover has changed, but the price has remained the same. Ebook versions are still $0.00. If you haven't read the story, or read it a long time ago, stop by ARe and help yourself to a shiny new copy. 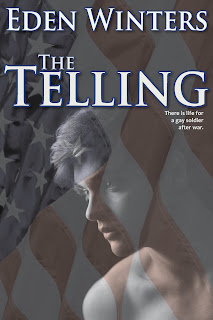 Time in Iraq cost Michael Ritter some of his hearing and a friend whose death he feels responsible for. He'd left Alabama hoping to escape a dull, small-town life, only to return four years later, lugging a duffle full of personal demons.

Michael’s biggest battle lies ahead, and he’ll need all the help he can get to find his way in a world where he no longer fits in. Jay’s not sure where he fits either, but it could be next to the war-torn soldier who needs his strength.