Where the Story Came From, a Guest Post by Shae Connor

Today I have the honor of hosting a guest post by Shae Connor, a fellow southerner that I had the privilege of hanging out with at last year's Outlantacon in Atlanta, Georgia. We had the best seats in the house as the booth across the way sold videos, which the sellers played non-stop throughout the con. Hee.

Anyway, Shae is here to tell us how her new release En Fuego came to be written. 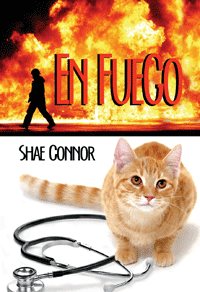 En Fuego: Where the Story Came From
By Shae Connor

En Fuego, released yesterday by Dreamspinner Press, is a novella about a firefighter, a veterinarian, and the cat who brings them together. But as is often the case, there’s a story behind the story.

Way back in 2007, Boise, Idaho, firefighter Dana Brown rescued a cat from a house fire. Two pictures from the scene, of him carrying the cat from the fire and then the cat looking up at him (adoringly!), have been making the internet rounds ever since, and one day, they showed up on my Tumblr dashboard. 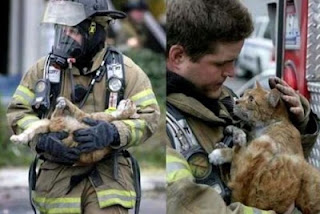 I couldn’t get the image out of my head. I wondered what happened to the cat after the rescue. Did she stay with the family? What if she was a stray? Would someone take care of her, get her to a veterinarian, make sure she was okay?

So I sat down, and I started to write. And what came out was En Fuego.

Brown was definitely the inspiration for Brad, and the cat he rescued for Fuego. The story itself didn’t come from either of them, though. It came from Marsh, the veterinarian who’s taken off guard by the sudden appearance of a sooty (but hot) firefighter at the door of his clinic. But Brad and Fuego offered up their own surprises along the way. Characters do tend to have minds of their own—even the four-legged, furry ones!

Like a lot of writers, I have more story ideas than I have time to write. Almost anything can prompt an idea. Heck, I passed two window washers at work on my way to the office one day last week and immediately started wondering about them. What if one of them was injured on the job and, say, fell for his physical therapist? Or what if one of the guys had a crush on the other one but was afraid to say anything, until an equipment failure left them stuck high up the building for hours?

But sometimes, no matter how many stories you have in the works, an idea comes along that just won’t wait. En Fuego was one of those. I hope you all enjoy reading it as much as I enjoyed writing it.

(A funny coda: Late last week, Elizabeth North, the head of Dreamspinner Press, emailed me a set of pictures she said reminded her of the story. It turned out to be the ones that inspired it!)

And now, the giveaway part! Here’s the story blurb:

Marshall Ramirez isn’t looking to fall in love, but from the moment firefighter Brad Flannery walks through the doors of Marsh’s veterinary clinic, he’s smitten. Marsh treats Fuego, the cat Brad rescued from a house fire, and convinces Brad to take her on as a foster—along with the three kittens Marsh helps her deliver. What Marsh really wants, though, is for Brad to keep him too.

Want to win a copy? Cool, I want to give you one! Just comment and I’ll pick a winner to receive an ebook of En Fuego (via the Dreamspinner Press website), as well as some story-related swag by mail. Be sure your email is included so I can contact you if you win!

Shae Connor lives in Atlanta, where she works for the government by day and reads and writes about pretty boys falling in love by night. She's been making up stories for as long as she can remember, but it took her a long time to figure out that maybe she should start writing them down. Now, she usually has far too many stories in progress, but when she does manage to tear herself away from her laptop, she enjoys running, hiking, cooking, and traveling, not necessarily in that order.

Shae posts snippets, updates, and thoughts on writing and editing at her web site, http://shaeconnorwrites.com. You can contact her at shaeconnorwrites@gmail.com.
Posted by Eden Winters at 2:38 AM