I'm thrilled to be hosting my dear friend P.D. Singer on the site today! I know from our many conversations that she's extremely well read, and when I asked begged her to write an installment for my Early Literary Influences series, I eagerly awaited her post, wondering which book(s) she might include. So please welcome P.D. aka Pam.

I'm also very excited that she's released another book in her "Mountain" series, this time Blood on the Mountain, even if she does put poor Kurt and Jake through the wringer.

The Speaker’s Dead and I’m Confused by P.D. Singer

I’ve been following Eden’s early literary influences pots and being delighted that we share a lot of childhood favorites. Since she’s asked to hear about one of mine, I have to tell you a story on myself.

My parents kept up on the popular releases of the day with the Reader’s Digest Condensed Books, which shoehorned four novels into one volume by the interesting editorial trick of jettisoning all but the essentials. Since I read everything I could get my little mitts on, these volumes were fair game, which is how an eight-year-old came to be reading Victoria Holt’s The Queen’s Confession: the Story of Marie Antoinette.

Just because I was reading this material in no way meant that I understood it, and in fact, I was still pretty shaky on the differences between fiction and non-fiction. I certainly had no notion of historical fiction—you mean you can make up a story that’s partially real? It certainly sounded real, and had dates in it that happened a long time ago, and Marie Antoinette as presented here had a fascinating voice. She narrated her own story, and I was enraptured.

I also knew the book was published recently, and I also knew that Marie Antoinette was dead.
This was a paradox to my eight-year-old self. How the hell (I probably thought it in milder language) did her words get written down just like she was telling them? How did that pesky author know what Marie Antoinette was thinking, especially since her head got chopped before this author could ask her any questions? And how nice of the author to tell us her thoughts in English too.

This was my first encounter with first person POV, and probably my first real encounter with historical fiction, or at least the first I recall. When I read Beautiful Joe and Black Beauty a few months later, my brain hurt even more, because not only were these stories clearly from another time, they were in the animals’ POV. My confusion was complete.

At this point I had some inkling there was a trick I didn’t understand here, and had a long overdue chat with my mother, who stopped putting quite so many books in the main bookcase. (I found the other cache when I was about fourteen, and was much stealthier about reading them and returning them to their dusty cubby. Heh.) But she clarified a number of things about points of view and authorial license, and how these stories were not actually interviews. I understood the concepts once I learned them, but sad to say, a bit of magic also went out of the world.

It wasn’t until I started writing my own fiction that a certain chunk of that magic returned, albeit in a different form.  I had the wonderful fun of writing first person POV. Now I could be the one to make someone think something.

First person POV isn’t common in romance, but certain characters work better for me in first, and others in third. Jake Landon, who is my POV character in Fire on the Mountain and most of Snow on the Mountain, is definitely a first person voice. I don’t think I could write him in third person even if threatened with coffee deprivation, but his partner Kurt Carlson absolutely refuses to let me into his head in that way. Kurt is third person in everything, and that’s one reason he doesn’t get to be POV very often. He got some voice time in Snow on the Mountain and in some as yet unpublished short pieces. Good thing he’s not shy about telling Jake what’s on his mind.

Kurt's strongly held opinions form the backbone of Blood on the Mountain, namely that Jake had damned well better get his ass back to the classroom before his professional opportunities disappear. Kurt would also like Jake to get more than one tentative toe out of the closet. Neither Jake nor readers will have any problem knowing what Kurt’s thinking, even if Jake’s the one narrating the story.

Jake has plenty of story, too, because he’s very conflicted about those issues, and before Blood on the Mountain is over, he’ll be yearning for the days when “who’s winning at strip archery?” was his biggest problem.

Jake Landon thinks a second ranger season in the Colorado Rockies with Kurt Carlson is close enough to heaven, and a national forest is big enough to be his closet. Pharmacy school—and the luxuries of electricity and running water—can wait, maybe forever, as long as Jake doesn’t have to come out. He doesn’t plan on Kurt’s vision of his future being as narrow and direct as the single track roads through the trees.

“Your future, your fear, and me,” Kurt tells Jake. “You can have two of the three, so choose wisely.” Jake may have no choices left after they stumble on armed men guarding a beautiful but deadly crop that doesn’t belong among the pines and spruces. Angry men with guns are only one danger in the Colorado wilderness, and Jake’s reluctance to come out is now his smallest problem.

Kurt’s skills and Jake’s silver tongue may not be enough to get them out of this mess—how much of the blood shed on the mountain will be theirs? 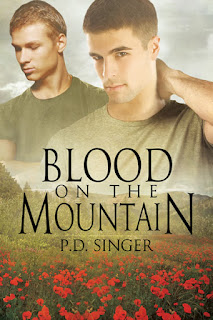 Blood on the Mountain is now available from Dreamspinner Press.

P.D. Singer lives in Colorado with her slightly bemused husband, two rowdy teenage boys, and thirty pounds of cats, all of whom approach carefully when she's in a writing frenzy. She's a big believer in research, first-hand if possible, so the reader can be quite certain P.D. has skied down a mountain face-first, been stepped on by rodeo horses, acquired a potato burn or two, and will never, ever, write a novel that includes sky-diving.

When not writing, playing her fiddle, or skiing, she can be found with a book in hand. Her husband blesses the advent of ebooks -- they're staving off the day the house collapses from the weight of the printed page.