After arriving in New York at eleven am on Sunday, June 3, I found myself promptly conned by a man posing as a cab driver, but at least he got me to the Carnegie Deli in time to meet my dear friend, D. H. Starr. The one thing I learned about the deli was that you'd better be hungry, or prepared to haul out leftovers. My omelet may have required a full dozen eggs.

Afterward Doug walked me to my hotel, The Out NYC (what an amazing place!), where we stashed my luggage and set off on foot for the station so he could catch a train back home. Had a great time, but miss him dearly. I'm hoping to see him again for Atlanta Pride, but if not at Pride, then definitely at GayRomLit.

I checked into my room to await my friend and Lammy date, P.D. Singer. After a nice vegetarian meal we had a giggle and gossip fest, caught each other up on current projects, then managed a few hours of sleep. (Sleep is highly overrated when you're out of town hanging with freinds.)

The next morning we caught a subway and headed for the Museum of Natural History, meeting up with Pam's research partner for her NY based masterpiece, The Rare Event. Flatiron Mike is a sweetheart. 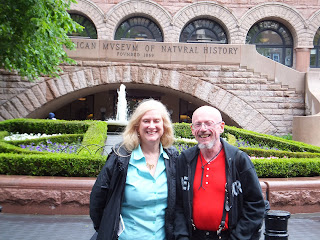 We dined at the Shake Shack, then hit the museum. 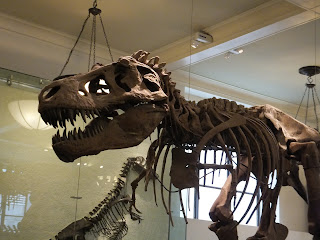 After taking tons of dinasaur pics and releasing my inner kid for a few hours, Mike took us to Strawberry Fields, John's Lennon's memorial in Central Park, and showed us where John had lived. 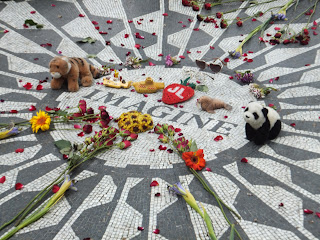 We said our goodbyes and Pam and I raced back to our hotel to get ready for the Lambda Awards. The rain, wind, and cold did not work in our favor, and we had to shop for last minute sweaters to keep warm, finally locating something workable in a conveniently placed Kmart. Who visits New York and shops at Kmart? Me, apparently.

After the red carpet moment at the Lammys (squeee!) Pam and I met fellow nominee, Barry Brennessel and his husband, Dave (they're adorable!), nominee Jay Bell and his husband, Andreas, Greg Hogben (soon to pub his first book!), Jim Provenzano, another nominee, who won a Lammy for Best Gay Romance category (congrats, Jim!), and Marshall Thornton, whose book was up for Gay Mystery.

Armistead Maupin & Kate Millett. Lypsinka gave an outstanding perfomance. Our goodie bags that we received  for attenting included books, books, and more books. Yippee! I got Tales of the City, which I'd intended to buy. Sadly, I didn't get a chance to get it signed by Armistead.

Coward that I am, I was afraid to read the four books competing against Settling the Score for Gay Romance honors, but I'd bought print copies of each, hoping to get them signed at the ceremony. I can't believe I left them at the hotel! Pam gamely braved the ride back to the hotel with me, (for a country girl, I'm getting pretty good at hailing cabs, if I do say so myself!). We made it to the after party at Slate, where Lady Bunny hosted one hell of a bash. I managed to get three of the books signed. It appears that Mel Bossa didn't attend.

I haven't danced in twenty years but, hoping evidence never shows up on You Tube, I had a blast. I danced with anyone and everyone, and was spun around the dance floor, literally, by the fabulous Milan, of Ru Paul's Drag Race fame. (And I didn't even get a picture!)

Pam and I called it a night at 1:30 am, rushed back to hotel to sleep a few hours, then dragged ourselves out of bed at 5:00. I found an honest to goodness cab driver to take up to the airport, where we said our goodbyes and returned to our lives. I read one of the four books on the flight back. I won't tell you which, but I'll be reviewing all four here on my site.

I'm absolutely thrilled to have had a book so honored, and I'm truly grateful to Lambda Literary, the judges, my fabulous betas, my publisher, editors, proofreaders, readers, and my newfound friends, who made the evening even more special. Ya'll rock.

Now, I'm counting the moments until GayRomLit, hoping we all meet again.
Posted by Eden Winters at 5:26 PM