Elisa Rolle at My Reviews and Ramblings is hosting giveaways of ebooks by GayRomLit authors, and today's book is Diversion by yours truly.

Haven't read it? Here's your chance! 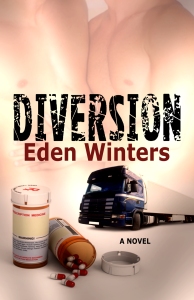 Drug dealers aren't always on the streets; sometimes they sit in offices and board rooms, selling merchandise in official looking bottles instead of little cellophane bags.

When given a choice between eight more years in prison or using his "expertise" to assist the Southeastern Narcotics Bureau's Department of Diversion Prevention and Control, convicted drug trafficker Richmond "Lucky" Lucklighter takes the sentence with the illusion of freedom. Cynical and unwilling to admit he's begun to care about his job, he counts the days until his debt is paid. His sole obstacle to getting his life back is the rookie he's assigned to train before he leaves; a rookie who quotes pharmacy texts, hasn't paid his dues, and has the obnoxious tendency of seeing the good in everyone – including the target of their investigation.

Former Marine Bo Schollenberger dreamed of becoming a pharmacist and watched the dream turn into a nightmare of PTSD-fueled prescription drug abuse. Battling his demons daily, he wakes up every morning, wondering, "Will this be the day I give in?" To keep his license, he must now put his skills to use for a diversion control task force, deal with a crude partner with too much attitude and no brain-to-mouth filter, and take down a drug lord who reminds him of his favorite cooking show hostess.

The bad guys don't stand a chance -- if Lucky and Bo don't strangle each other first...
Posted by Eden Winters at 3:23 PM