Book Giveaway at Stumbling Over Chaos

Hurry over to Stumbling Over Chaos were blogger extraordinaire, the lovely Chris, is hosting a drawing for a copy of my dear friend P.D. Singer's upcoming novel, Fire on the Mountain. Hot park rangers putting out fires, only the start a blaze of another kind burning between them.

Take a break from academics, enjoy the Colorado Rockies, fight a fire now and then. That’s all Jake Landon expected when he signed up to be a ranger. He’ll partner with some crusty old mountain man; they’ll patrol the wilderness in a tanker, speak three words a day, and Old Crusty won’t be alluring at all. A national forest is big enough to be Jake’s closet – he’ll spend his free time fishing.
Except Old Crusty turns out to be Kurt Carlson: confident, competent, and experienced. He’s also young, hot, friendly, and considers clothing optional when it’s just two guys in the wilderness. Sharing a small cabin with this walking temptation is stressing Jake’s sanity – is he sending signals, or just being Kurt? And how would Kurt react if he found out his new partner wants to start a fire of a different kind? Jake’s terrified – they have to live together for five months no matter what.
Enough sparks fly between the rangers to set the trees alight, but it takes a raging inferno to make Jake and Kurt admit to the heat between them.
First Electronic Edition published by Torquere Press (2009).
Bonus Short Story: Into the Mountains
Long before he met Jake, Kurt Carlson climbed Yosemite with his best friend, Benji. But after a storm traps them halfway up the face of El Capitan, Kurt has to accept that their friendship isn’t what he thought. 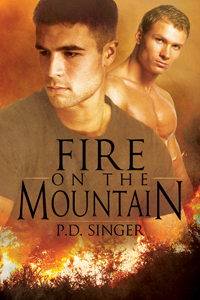