When Jeff Erno first agreed to do a guest post on my blog, we thought about something Holiday-ish, but when he sat down to write, his words took an entirely different direction. Tears came to my eyes as I read his post, and I'm honored to share his words with you. - Eden

Why I Care About Bullying by Jeff Erno
My childhood development and coming out story are not so different than that of any other gay man. When I was very young my mother noticed I was different and often told me (and others) that I was “special”. Not special in the “rides the short bus” kind of way, but unique—different from other boys. My early Christmases and birthdays were not like those of most boys. I asked Santa for a Barbie Head (A huge bust of Barbie. It was cool because you could do her makeup  and hair) and an Easy Bake Oven.  I used to go over to my cousin’s house and spend the day playing Barbies with her. I was the only boy who knew all the girl games. Hopscotch, Down-Down-Baby-Down-By-The-Roller-Coaster, Jump Rope, etcetera.  When I was four, Mom caught me in her closet trying on clothes. At age eight I talked our babysitter into painting my fingernails pink because I loved her nail polish.

Around the time I started grade school, I had a religious conversion experience at the Baptist Church’s Vacation Bible School.  I had been “born again” or “saved”.  I think all the kids who attended got saved. It might have been mandatory. At the very least, it was expected. Well, I took it quite seriously, although I may have been the only one. From that point forward, I was deeply religious.

My religiosity and my effeminacy eventually became synonymous. Well they were to my mother anyway. The fact that I was so devout and so disciplined about my faith was consistent with Mom’s belief that I was special. As I got older I began to figure out that other people had expectations. There were behaviors which were considered normal and others which were not. There were boy toys and girl toys. There were things that boys could like and things that girls could like, and if you happened to be a boy who liked girl things, you had to keep them secret. In the fourth grade I learned how to crochet. I could only do my crocheting at home in secret, though, and making a beautiful afghan was not something I could brag about or be proud of.

By the time I was in the fifth grade, I was being bullied pretty badly at school. I cried a lot and begged my mom not to make me go. This seemed strange to her because she knew how much I had always loved school. Around this time, she and my father were having marital problems and were fighting constantly. Mom took me to a doctor and he prescribed some anti-anxiety medication for me. He told me I needed to stop worrying so much about everything. Mom was convinced that my biggest problem was stress caused by the fighting in our home as well as by the bullying at school. She believed the kids picked on me because I was religious—not because I might be gay.

I was pulled out of the public school in the sixth grade and sent to a Christian school where all my classmates were religious. It should have been the ideal situation for me because I no longer was different. I should have fit right in and been accepted with open arms. During the second week of classes, my teacher held me after class for a one-on-one counseling session. He pulled out his Bible and quoted verses to me from the Old Testament to show me that God wanted boys to act like boys and girls to act like girls. He said I needed to start working on becoming more manly. Follow the example of the other boys in class, he said. I was so embarrassed that I never told anyone.

The bullying continued even at the Christian school, but it was much subtler. One time I was taken into the bathroom and gut punched repeatedly. Another time I had my head flushed in the toilet. I knew I could not tell anyone though. I knew I had to be tough because God expected it.

High school was different. I got sent back to public school because my parents felt that the small Christian school would not have the classes I needed. They didn’t have a chemistry lab or even a gymnasium. Well, that’s what my mom and dad said, but the real reason was that they couldn’t afford the tuition at the Christian school any more.  I had thought the bullying was bad in the private school, but it was nothing compared to public. My freshman year of high school was Hell on earth.

When I turned fifteen I began working at the local supermarket as a bagboy. I talked my mom into letting me use the money I made to pay for my own tuition so that I could return to Christian school. I went back in the tenth grade and worked really hard to complete my classes as quickly as possible. I advanced through three grades in just two years and graduated a year early.

Eventually I figured it all out. By the time I was eighteen I knew I was not “special”. I was just gay.  I finally left my religion and embraced my authentic self. During the 90s I was very active in my local gay community. I volunteered with PFLAG and the AIDS outreach organization. I moved to a town that had a social group for LGBT people, a Gay Alcoholics Anonymous, and even a gay bar. I stayed in the retail grocery business and eventually became a manager.

Now here it is twenty-some years after high school, and we hear all of this stuff about bullying. We now have Facebook and other social networks which did not exist back when I was growing up, so there is a lot more public discussion about bullying. When a gay kid commits suicide, it doesn’t take long for a lot of people to find out. Every time I hear a story of a kid like Jamey Rodemeyer, my heart breaks. I can’t help but think, “There but for the grace of God…”

I do not know how to make things different. I really wish I did. To be truthful, I don’t know what I can do, if anything. That’s why I write. That is why I wrote Bullied. It’s the only thing I could think of to do.
And that’s why the issue of bullying is so important to me.

Thank you, Jeff for sharing this very personal look at your life with us.

I have already mentioned his book "Bullied," but Jeff also has a soon to be released novel that I am very much looking forward to: Second Chances, coming January 1, 2012 from Camel Press. Pre-order now at Amazon.

Harold Wainwright is dying. At seventy-nine, stricken with malignant cancer, the multi-billionaire insurance mogul realizes he has much to regret. In his youth he rejected his only true love and instead chose to advance his career and build his financial empire. Single-mindedly he focused upon achieving his own goals, looking out for number one, and acquiring a monetary fortune. Now he is alone, and all he has is his money…and his life is over. Doctor Timothy Drayton has devoted his entire career to developing the technology to prolong human life. His entire focus has been upon creating a computer chip which can be implanted into the human brain, allowing human consciousness to be transferred from one human subject into the mind of another. Given optimum circumstances, he is confident that he can now preserve the consciousness of a dying patient into the mind of a donor subject with an electronic surgical implant. Jesse Warren is eighteen years old, about to graduate from high school. He’s a track star, model student, and the typical all-American kid. One day while on his way to track practice, tragedy strikes, and Jesse is in a terrible accident, rendered comatose. When his family learns the horrifying news, they believe they’ve lost their son forever. Jesse Warren is pronounced “brain dead”. When neurosurgeon and world-renowned brain specialist Dr. Timothy Drayton arrives, telling the Warren family that he has an advanced form of experimental treatment which can possibly save young Jesse and restore his consciousness, the Warrens are convinced that God has sent them a miracle. They are overjoyed the next morning when their son undergoes surgery and awakens as a new man. His memory loss, they are convinced, is amnesia due to his accident. Jesse lives, and is given a second chance. Will his new life prove to be the impetus for significant change, or will the old Harold Wainwright emerge to make the same mistakes a second time around? Most of us are given but one chance to make the right choices, but imagine if… there were such things as Second Chances. 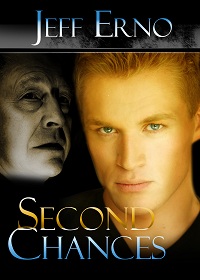 Visit Jeff at his site: