Tentative Blurb for Galen and The Forest Lord

For those of you who've seen the cover and wondered about the story, here's the draft blurb for Galen and the Forest Lord, due out September 10 from Torquere Books:

By the time Galen Olaf-kin woke up and smelled the spiced ale, it was too late, and he never finished the wicked deed for which he stood trial. Banished from his home, he flees to the forest, taking nothing but the unwanted infant he's rescued. Perhaps the legends are true and the Forest Lord will take them both in – he's said to give sanctuary to outcasts, but none of the stories mention the naughty, tempting things he whispers, or that he shares Galen's forbidden passions.
Lord Erik rolls his eyes at the prophecy that states when human hands deliver a babe to the forest he’ll meet the mate destined to reunite forest folk with humankind. What interest has he in a child? The handsome human that brings the babe is another matter entirely, and a little thing like destiny won't stand in Erik's way of claiming the golden-haired Galen as his own. Or will it? 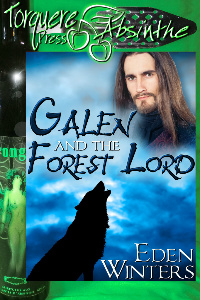