Only I could launch a new book and forget to post on my blog. Sorry, folks.

Something Wicked is now available on Amazon and on KU. This started with a premade cover by the super talented Charmaine Ross, and the idea continued from there. I mean, have you SEEN the guy on the cover? Wow!

Oh, and I had a wonderful time creating a snarky cat/spider/snake/raven/dragon/motorcycle familiar named Chynne.

A mysterious legacy. A magical journey. The worst guide in history!Piers Adams never knew his parents or birthplace. All he wants from his mundane life is a better apartment and fewer working hours serving drinks at a club in Asheville, North Carolina. Sure, weirdness happens around him occasionally. Coincidences, right? He can’t possibly wish things into existence. After all, he’s only human.Maybe.It’s hard living down to a nickname like Wicked, but Prince Wycke Bertillian of the magical realm tries. He enjoys his lack of responsibilities until he’s coerced into a clandestine mission: find an evil sorceress’s hidden son in the human realm.A chance encounter awakens magical potential beyond what either realm has seen before. Barely managing his own life doesn’t qualify Wycke to guide a novice sorcerer with infinite magic and zero self-preservation skills. Unfortunately, it’s Wycke or nothing standing between Piers and those who’d take Piers’ magic for themselves—magic powerful enough to rule two realms.Piers and Wycke had better get their act together. Their lives and the fate of the human and magical worlds rests in their highly incompetent hands. 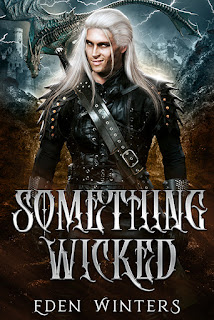 Now available on Amazon and KU