It's been a while since I've written shifters, but now I have a brand-new book for you: Never Underestimate an Omega. It's currently available for preorder at Amazon, releasing August 1. 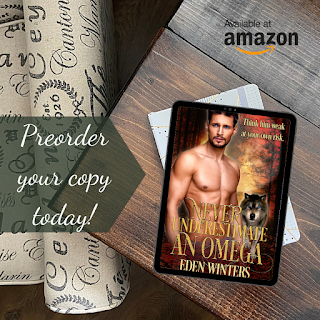 An alpha leader must have an alpha mate, but Gray wants only one man.

And that man is an omega.Wolf shifter Gray Collins returns to his home pack to avenge his father’s murder, never expecting to take on the role of leader. Gray is a loner with no desire to tackle the politics of being Pack Alpha. Worse yet, he falls for the man he’s come to depend on—omega Logan Richardson.According to pack lore, omegas are inferior, nothing more than lowly servants. Or are they? Logan is far too cunning, fierce, and bold to be a low-ranking wolf. While he keeps his head down in public, when they’re alone, Logan stands toe-to-toe with Gray like no one else dares. Mutual respect grows into friendship, friendship into a white-hot desire neither can fight.Despite the law and the odds, the two wolves form a tentative bond. Together they lead the pack through strife and threats, all while keeping a secret—a secret that could get them both killed, and plunge the pack back into the savage dark ages.

The entire Lycan world is on the brink of a hard-won lesson: Never underestimate the relentless force of an omega.