So many folks who read Highway Man said they wanted more, and wanted to hear from Mike's POV.  I listened. And I wrote. At long last, Drifter is up for preorder at Amazon, releasing July 7. Check out the gorgeous cover by Cate Ashwood Designs! 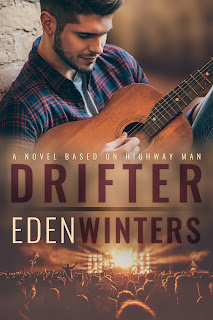 Some legends never die.Killian Desmond met his end in the fiery crash that killed his band, or so the newspapers say. Now a nameless drifter, he plays one pick-up gig after another in a haze of pain and regret, moving on the minute someone says, “You sound like that guy from Trickster.”Getting outed cost Mike Rose his musical family. A bassist without a band, he’ll play any kind of music to earn a paycheck, but Trickster’s music provides light during the darkest moments of his life.A chance meeting brings together two lost souls who spark enough heat to set their guitars on fire. Their chemistry, both onstage and off, feels like something written in the words of a song and gives them courage to face life again.But to seize their future, they have to confront their past.Every damned, ugly inch of it.

Preorder your copy today at Amazon.
Posted by Eden Winters at 3:19 PM