I'm very happy to report that Suspicion (Diversion 7) has now released at Audible, and I think narrator Darcy Stark did an incredible job of bringing Bo and Lucky to life.

We also included Relation (Diversion 7.1) and Tradition (Diversion 7.2). There are several reasons for that. First, sometimes in a series readers only pick up the novels, not the short stories, and these two are important to the plot. Secondly, yes, I might have brought in more revenue by selling them separately, but it didn't sit right with me for reasons I might post about one day. Thirdly, I love my readers (listeners) and wanted to give you a little something extra.

So, pick up your copy of Suspicion today in audio, along with the bonus material. Too bad it was too late to include them in the ebook too. I mean, who wouldn't want more of Bo's backstory and to meet his family? Or peek in on Bo and Lucky's first true Christmas together? 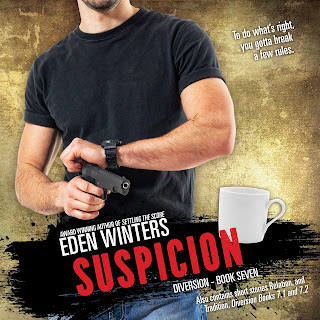 2018-2019 Rainbow Awards: Best Gay Romantic Suspence
Lucky “Simon Harrison” Lucklighter left behind his criminal past to become one of the best agents in the Southeastern Narcotics Bureau. He’s found a committed partner in fellow agent Bo Schollenberger and built a life.
Now, enemies within the SNB and a friend’s betrayal leave him nowhere to turn—not even to his mentor.
His boss’s life, the future of the SNB, and Lucky’s career depend on him. With the help of his lover, an old enemy turned ally, and a man Lucky thought he’d seen the last of, he must stand and fight for what he believes in.
Even if he has to step outside the law. 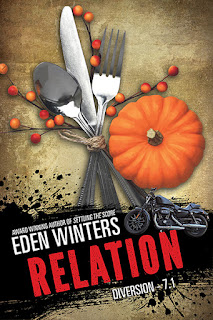 Expecting to die while trapped in a Mexican drug tunnel can make a man rethink his life choices.
Bo and Lucky have a home, steady, if dangerous, work, and each other. Maybe even the beginnings of the reconciliation with the Lucklighter clan they promised themselves. The Schollenburgers, though—Bo hasn’t yet opened up that can of worms, near-death experiences or no.
Yet another Thanksgiving approaches with no plans to celebrate with family. Lucky’s willing to wait as long as Bo needs to get up his gumption.
He’s not nearly so patient with the bikers stalking him. 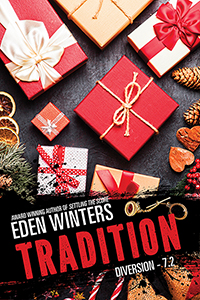 Lucky has dreamed of an old-fashioned Christmas with Bo for years. Unfortunately, something always got in the way. This year is looking unusually promising, though, if they can keep well-intentioned family and work from spoiling the magic of the season. Their first Christmas together will set the bar for years to come, which means blending their favorite traditions and taking the best of both.
Last minute shopping? Bo’s list. Holiday junk food? Lucky’s. Nostalgic Christmas songs? Bo’s. Hiding to avoid the dreaded office Christmas party? Not Bo’s. And while Lucky is up for compromise, he’s got something extra special planned for his partner, something a little bit naughty and whole lot nice.

Get all three at Audible.