Haven't read Consorts of the Red King yet? For a limited time, the ebook price is reduced to .99 cents at Amazon. And remember that no matter what you paid for ebook, if you're an Audible member, it allows you to get the audiobook at a discount.

Get yours now, before the promotion ends! 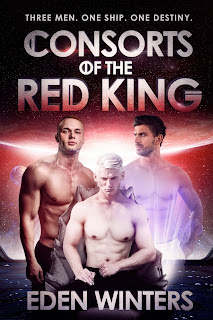 From the day of his birth Prince Jorvik of Akiak learned duty, wisdom, and honor from his father, leaving him ill-equipped to withstand betrayal by his Federation-puppet uncle. He has no love for the greedy off-worlders who plunder his world’s natural resources and enslave his people. To defeat his foe, he needs the cunning, fearlessness, and touch of treachery only outlaws can offer.

Two off-world mercenaries make unlikely partners in Jorvik’s quest for vengeance, but the more he learns of them, the more common ground he discovers. In each other’s arms they find passion, heat, and maybe, a reason for living—until their common enemy threatens to tear them apart.

A standalone novel based in The Sentinel universe.
Posted by Eden Winters at 3:55 PM