Settling the Score was one of my earlier works, that shockingly sent me to New York City and the 2012 Lambda Awards. Out of many entrants, my book was one of five finalists chosen for the event. Wow!

I never expected to win, or even get recognition, but I entered to show my support for Lambda Literary's efforts. The day the finalists were announced I was at my day job, and went out to the car for my lunch break. I saw an email on my phone "2012 Lambda Finalists" and opened it, as I wanted to see who of the authors I knew were in the running.

I did what any self-respecting Southern girl would do: I burst into tears. Then called Mama.

I'm glad none of my coworkers noticed me, for they'd have flocked to my car wondering what was wrong. I was in the middle of a huge project at work, and taking off for the awards would be tricky. My boss knew I dabbled in writing, but I never elaborated. In order to get the time off, I had to give her a valid reason.

She gave me time off.

She bought and read the book.

She bought and read the Diversion series.

The book didn't win, but the honor was to have been chosen for finalist, especially as I was a relatively new author at the time. Gaining support from by boss? Priceless.

Fast forward to a few months ago, when a I put up the sixth book in the Diversion series on ACX for my narrator to grab (the whole "select your narrator" thing wasn't working). Narrator Joseph Morgan contacted me, and impressed me so much that I hated to decline.

What book did I have that I could offer him instead?

Settling the Score. And he did an amazing job.

Now Settling the Score is available at Audible here. 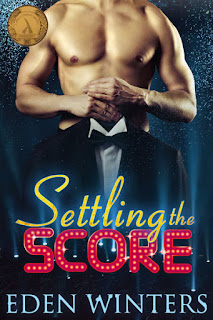 Outed and dumped on national television by his rising star boyfriend, Joey Nichols must face the bigotry of the locals in his small Southern town alone. His dreams of a happy ever after lie crushed at his feet. Novelist Troy Steele has an axe to grind against Hollywood heartbreaker types. Transforming Joey into a gorgeous, unobtainable hunk would be payback worthy of Troy’s poison pen. It's a brilliant way to get back at Joey’s image-obsessed ex-boyfriend and the movie producer who’s mutilating Troy’s novels. What begins as simple revenge may tangle them together in something far more complicated. Living well may be the best revenge, but Troy and Joey could rewrite that to loving well.