It's taken a lot longer than I'd hope to get to this point, but I'm thrilled to finally reveal the cover for Suspicion (Diversion Book 7), created by the super-talented L.C. Chase. 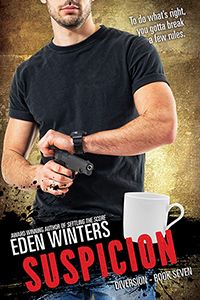 Lucky “Simon Harrison” Lucklighter left behind his criminal past to become one of the best agents in the Southeastern Narcotics Bureau. He’s found a committed partner in fellow agent Bo Schollenberger and built a life.

Now, enemies within the SNB and a friend’s betrayal leave him nowhere to turn—not even to his mentor.

His boss’s life, the future of the SNB, and Lucky’s career depend on him. With the help of his lover, an old enemy turned ally, and a man Lucky thought he’d seen the last of, he must stand and fight for what he believes in.

Even if he has to step outside the law.

I'd hoped for a November release, but it looks like it'll release in December. I'll keep you posted.