In honor of Halloween, I'd like to share part of Same Time, Next Year, a story of young love and the thinning of the walls between worlds on Halloween. 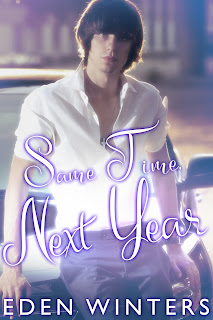 Jerome and Greg played on the dirt road halfway between their homes when they were kids, and found much better games to play there when they grew older. It's their special spot, the perfect place for Greg to propose, and the worst place possible for the accident that takes his life.

Devastated by the loss, Jerome visits that lonely road on the anniversary of Greg's death, only to discover that not all endings are permanent.


“I still can’t believe that your folks sprang for a brand new Mustang convertible for graduation and all I have to drive is my sister’s hand-me-down clunker. It must be nice.” Jerome ran a hand down one sleek fender, watching his reflection in the shiny black surface. At least one of them had a nice ride. He couldn’t help it Greg’s folks had money and his didn’t.

His best friend since childhood came up from behind and they appeared together in the car’s tinted window, a matched set, height-wise, at six foot each. Greg’s dark hair and light eyes contrasted with Jerome’s dark eyes and light brown hair.

After a brief glance over his shoulder to ensure no one was watching, Greg leaned in for a kiss, balancing a loaded duffel between them. “And you look so good in it,” he murmured. His mouth tasted of breath mints.

Jerome took the kiss and the bag, placing it in the trunk when Greg pulled away. “Is that everything?”
“I think so. Maybe we’d better check one more time.” A suggestive smile and winking green eye hinted at mischief.

Jerome took Greg’s hand and laced their fingers together, leading the way back up two flights of stairs to their apartment. The cramped, one bedroom shoebox was tiny, yet special—their first home together. “Okay, but if we’re late, I’m gonna let my sister know who to blame.”

Greg jumped away, eyes wide in feigned terror. “Dude! Anything but that!” They shared a laugh. Shelby was sweet if somewhat bossy, and liked to pick on her brother’s boyfriend. Greg humored her, pretending to fear the petite brunette.

“Okay. Let’s do a quick check and then get on the road.” Jerome disappeared into the bedroom, leaving Greg to inspect the living area. He returned a moment later, holding a piece of dark fabric. “I’m glad we checked. You forgot this.”

“My cape!” Greg grabbed the proffered garment and clutched it to his chest. “I can’t be Dracula without a cape.”

Jerome grinned. He opened his fist to reveal a set of plastic teeth with long, pointed canines. “Or without these. Come on, let’s go. The party starts at eight.”

Now ready, they returned to the car. The engine purred like a contented cat when Greg fired up the engine. “Can we?” Jerome asked, putting on a hopeful face.

Greg cocked one eyebrow and attempted a glare. “It’s October. It’s cold.” A muscle twitched at the corner of his mouth.

The restrained smile broke free, revealing a chipped front tooth. “Oh, all right. If it means that much to you.” Greg flipped the switch to retract the roof and turned on the heater while it folded back. “The things I do for you.”

“Because you love me.”

“And because you look out for me.”
“Always have, Jer, always will.” Yes, Greg had, ever since grade school when they’d first met on the playground.

Their fingers interlocked over the gearshift, they chatted, sang along with the radio, and took turns grinning at each other. The tassel from a college graduation cap swung back and forth from the rearview mirror. Jerome had one just like it in his car. Had graduation really been just four months ago?

“Sure you won’t change your mind and spend the night with me?” Greg asked when they passed the sign that read, “Murphy Town Limit.” Wide spot in the road was more like it.

Jerome sighed. He’d love to spend the night together, but wasn’t ready to push it with Greg’s parents yet. They weren’t nearly as accepting as his own. Besides, it was only for one night. “I’d love to, you know that, but...”

The next few minutes were uncomfortably quiet before Greg spoke again. “Things would be so much easier if my parents could just get over the fact that we’re together. You think they’d be happy that I’m not out cruising and getting girls pregnant like my brother. I mean, he’s twenty-eight, still living at home, and has two kids with two different women.”

Jerome gave Greg’s hand a gentle squeeze. “They accepted me well enough in your life before they walked in and caught us kissing.” Oh what an argument that had been.

“It doesn’t bother them to catch my sister kissing her boyfriends, and she brings home a new guy every week.” Greg’s face twisted into a scowl. “They should be darned impressed that we’ve been together so long. All it’s ever been is you and me.”

“That’s all it ever will be if I have anything to say about it.” Jerome narrowed his eyes to match his possessive growl.

Greg stopped the car at a four-way stop. He looked right, left, and in the rearview mirror before delivering a brief, sweet kiss. “That’s all it will ever be. Now, think that will tide you over for a few hours?”

“Shelby won’t care if we make out at her place.” Jerome’s sister was pretty open-minded and understanding, even if she did like to tease.

“It’s not Shelby I’m worried about. Other people will be there and it’s not worth the grief. This is our Po-dunk home town, not the big city.” Greg nuzzled against Jerome’s nose. “We can behave for a night, right?” Poor, shy Greg. Would he ever be comfortable enough to kiss openly in public?

Jerome poked out his lower lip. “Not all night, I hope.”

A wide grin was his answer.

“I know! Why don’t you stay with me, Greg? My folks love you and call you their son-in-law.”
Greg’s face flushed and he turned his attention turned back to the road. “You know my dad wouldn’t forgive me for not staying with him and Mom. Besides, I have some things I need to discuss with them.”

“Looks like we’re stuck, then.” Hmmm... Something was on Greg’s mind. Too bad there wasn’t time to find out what.

The conversation ended when they pulled up in Shelby’s yard. Greg squeezed the car into the only space available on the front lawn. A ghost chased a giggling witch across the lawn, while two skeletons catcalled from the porch. Yep, a lively crowd tonight.

Greg flipped open the lighted visor mirror and dabbed on white face paint with a sponge.

“Hey, Greg? I have an idea.” Jerome reached into the back seat for his werewolf costume.

Count Dracula leered at him while outlining one eye in black. “I wuff yo ifears,” the count said around a mouthful of plastic teeth.

Jerome pulled a rubber mask over his face. The tiny mouth opening muffled his words. “Remember our old parking road?”

“Yeffff.” Had one single word ever sounded so hopeful?

“What say we put in our appearances and go relive old times?”

“Owff!” Greg yelled, jabbing himself in the eye with an eyeliner pen.

Greg removed the plastic teeth. “No, you’re not, you just love teasing me.”

Two hours later found them parked on a lonely dirt road exactly halfway between their parents’ houses. When they were ten they’d built log forts here, at twelve they’d tried out new mountain bikes. At sixteen it was the site of their first kiss, and shortly thereafter they fumbled their way through do-it-yourself sex education.

They started by kissing until the gear shift dug painfully into Jerome’s belly, then they gave up and climbed into the miniscule back seat. “I think I now know the real reason your parents bought this car,” he griped when they resorted to getting out of the car to strip. “It’s the modern equivalent of the chastity belt.” The temperature had dropped since the sun went down, and they shed their clothing in record time, racing to see who could get back into the car first. No mention was made of lowering the roof.

“We’ll just have to persevere then, won’t we?” Even without the plastic teeth Greg did an impressive job of neck nibbling, slipping one cool hand up Jerome’s side.

Same Time, Next Year is available at Amazon and other e-books sites.