Promises to Readers and Taking Chances

Let’s make one thing perfectly clear: I love my readers. When they pick up an Eden Winters book, I want them to feel the love I poured into the pages for them. And for them I promise that I will always tell every story to the very best of my ability. I’ll never cut corners to meet deadlines, and I’ll never write to market. The book must come from my heart or it won’t be my best.

That said, not every reader will love everything I write—that’s a given, and understood.

But one element is crucial to my ability to tell quality stories: I must take chances.

Who wants to read the same novel over and over again? I don’t, and I’m sure you don’t either. So I’ll try different things, or pursue a plot bunny that takes me down unfamiliar trails.

Sometimes I’m challenged, either by myself or a crit partner, to expand my horizons and write outside my comfort zone. The most recent challenge was to write erotica.

Now, I’ll admit I’m not an erotica reader, and only write sex into my stories where it is necessary to the telling. A Bear Walks Into a Bar is no different, although it’s far more sex-heavy than my usual. I’ve loosely based my shifter society on bonobo apes, and my shifters engage in sexual activity for bonding, comfort, hierarchy, discipline, or because it’s Tuesday, in pair, trios, and groups. Some characters are monogamous by nature once they select a mate (wolves), others have no concept of monogamy (foxes).

So, I’ve taken a chance and written something different. Will I continue writing erotica? At the current moment I’ve no plans to, though I do have a plot bunny involving a committed trio that’s based in The Sentinel world. However, Bo and Lucky are making demands about the next Diversion novel, and they're hard to say no to, and for all their idiosyncrasies, they're monogamous.

But regardless of what is next, one thing is certain: taking chances has helped me to grow as a writer, and I promise to never play it safe. 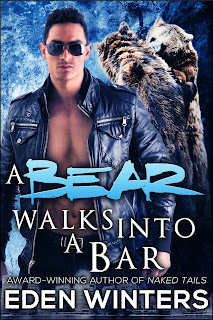 It takes one strong alpha with a tight grip to keep a mountain full of shifters under control. Sawyer Ballantine’s contending with an uppity wolf leader and a herd of shifter elk bound and determined to take over. He might be the lone bear on the mountain, but he’s not going to allow another four shifters to just move in, especially not when they whiff of power. They’ll either be his in all ways, or they’ll be gone.

Dillon, Jerry, Kevin, and Brad have no one but each other since their groups kicked them out. The young bear, wolves, and fox make a merry ménage, pooling their meager skills and serving beer. They’ve stumbled into more than they understand, caught in the dispute between the Urso of Ballantine Mountain and the elk. But winter’s setting in, and they don’t know how to keep Dillon safe for hibernation.

And then a bear walks into their bar.

Amazon US
Posted by Eden Winters at 12:18 PM