Fantastic Bargain on a Fabulous Novel!

Ever since I published Naked Tails, folks have been after me to write more unusual shifter stories, be they about possums, bears, or even the chipmunk/skunk medi-vac pilots from the book. I'm working on the bears now, and have marked the pilots as "one day."

That said, I've developed an affinity for lesser known shifter types, and when I chance upon the occasional story that doesn't involve wolves or big cats, I pounce. Okay, to be fair, I pounce on wolves and big cats too, but still...

Anyway, as I was saying, off-the-beaten-path shifters fascinate me, and I'm thrilled that dear friend and critique partner, literary hand-holder, etc., P.D. Singer has created a novel-length follow-up to her short romp Tail Slide. The short work is even included in the longer one.

I've been privileged enough to get a pre-read, and let me tell you, the book not only met my wildest little dreams, it passed them. Be still my shifter-loving heart! 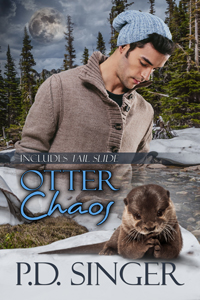 Lon Ewing snowboarded in and turned economist Corey Levigne’s life upside down, introducing him to a world he didn’t know existed. Corey’s still adjusting to a boyfriend who shifts into an otter and raids the koi pond—and now Lon says Corey’s department chair is a werewolf?

Wolves at the university, wolves in the bank—across Lon’s desk sits Professor Melvin Vadas and his hench-wolves, demanding a construction loan for the pack’s new lodge in the mountains. There’s just one little problem: the proposed building site is home to a breeding population of rare fish.

What do wolves care for stupid human rules, an otter who’d barely make a good snack, or one pesky man determined to protect the environment? Once they’re snout to snout with Corey and Lon there’s more than silverscale dace on the Endangered Species list.

Fresh powder snow and running water in the Colorado back country call Lon like the moon calls the wolves. Belly-sliding to a good time on the weekends makes up for a workweek at a desk, and meeting Corey adds a whole new level of fun to snowboarding.
It’s easy to slip away for time alone in the woods without raising suspicion, but how’s Lon to entertain himself when bad snow and a worse spill force them off the mountain too early?
Never give an otter a box of Cheerios.

And not only does Ms. Singer give us otter shifters, she's also made it really easy to get our paws on (pun intended). From now until the release date of October 9, get Otter Chaos for only .99 cents. That's right folks, less than a buck. But remember, the sale is only for preorder. After publication the sale is over.

Amazon, All Romance eBooks,  and Smashwords.