And Now For Something Different: Eden Winters Writes Menage

As I'm mentioned in my posts, I constantly strive to grow as an author, and a dear friend recently helped with that by challenging me to write erotica.

I tried, really I did, but I'm a romance writer at heart, so I couldn't help leaning toward that theme. However, I should warn readers that my new novella will feature a non-monogamous couple who, for fun or to establish dominance in their shifter hierarchy, play with others, both together and alone.

I don't have an exact publish date, but look for A Bear Walks Into a Bar to release sometime this month. This is the first installment in a planned four-part series: Owned by the Biker Bear. And I love the cover, created by the incomparable P.D. Singer. 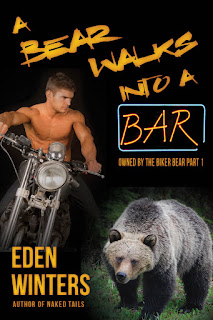 It takes one strong alpha with a tight grip to keep a mountain full of shifters under control. Sawyer Ballantine’s contending with an uppity wolf leader and a herd of shifter elk bound and determined to take over. He might be the lone bear on the mountain, but he’s not going to allow another four shifters to just move in, especially not when they whiff of power. They’ll either be his in all ways, or they’ll be gone.
Dillon, Jerry, Kevin, and Brad have no one but each other since their shifter groups kicked them out. The young bear, wolves, and fox make a merry ménage, pooling their meager shifter skills and serving beer. They’ve stumbled into more than they understand, caught in the dispute between the Urso of Ballantine Mountain and the elk. But winter’s setting in, and they don’t know how to keep Dillon safe for hibernation.
And then a bear walks into their bar.
Posted by Eden Winters at 12:55 PM