Collusion, Diversion Book 2, Second Edition, is now available for pre-order at Amazon. Look for it's release on Saturday, June 10. 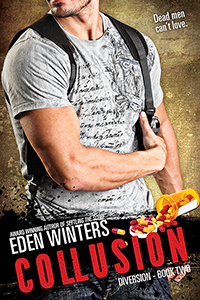 Dead men can’t love.
Former drug trafficker Richmond “Lucky” Lucklighter “died” in the line of duty while working off a ten-year sentence in service to the Southeastern Narcotics Bureau, only to be reborn as Simon “Lucky” Harrison. The newbie he trained, former Marine Bo Schollenberger, is now his partner on (and maybe off) the job. It’s hard to tell when Lucky doesn’t understand relationships or have a clue what any sane human is doing in his bed. Bo’s nice to have around, sure, but there’s none of that picking-out-china-together crap for Lucky. While fighting PTSD, memories of a horrid childhood, and a prescription drug addiction, Bo is paying for his mistakes. Using his pharmacy license for the good guys provides the sort of education he never got in school. Undercover with his hard-headed partner, Bo learns that not everything is as it seems in the world of pharmaceuticals. When a prescription drug shortage jeopardizes the patients at Rosario Children’s Cancer Center, it not only pits Bo and Lucky against predatory opportunists, but also each other. How can they tell who the villains are? The bad guys don’t wear black hats, but they might wear white coats.
Posted by Eden Winters at 2:51 PM