A Matter of When - On Sale Now

Although I normally can be found with my Kindle in my purse to take advantage of a few spare moments to read, I still collect print copies of books. There's just something about holding a paper book in your hands, isn't there?

Well, for the month of April, Dreamspinner Press is offering certain print titles at 50% off, including my latest Dreamspinner offering, A Matter of When, featuring a rocker whose feeling a bit lost and the dedicated opera tenor who helps him find his way again.

Pick up your copy today! 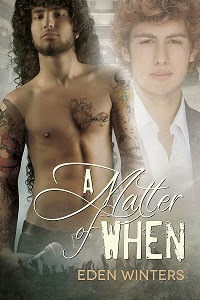 Sebastian Unger’s rich, classically trained tenor inspires wicked thoughts. More than a pretty choir boy, he cracks the whip without hesitation to drive tattooed bad-boy Henri to give his all to his music. Working, fighting, and finally establishing a fragile peace, they find inspiration and perhaps more in each other. But the clock is ticking. Time will pull Henri back to the grit and gold of LA’s mean streets and fame machine, while Sebastian must return to the opera circuit, where a mysterious man known as “the patron” holds far too much sway. Only the trust they've built on a handful of notes bridges their two worlds...and shields them from malice.
Posted by Eden Winters at 2:41 AM