It's been nearly a year since I jotted down the first notes for Manipulation, the fourth book in the Diversion series, and a lot of work has gone into the story since then, not to mention a very enlightening weekend spent at the Writer's Police Academy. My betas and crit partners held my hand throughout the process, and finally, finally, the book has been launched.

I'd like to acknowledge the folks who had a hand (and kind words) in this story:


Many thanks to P.D. Singer, John A., John R., Lynda B., D.H. Starr, Feliz Faber, Z. Allora, A.B. Gayle, Kayla Jameth, Becky Condit, and Will Parkinson, for handholding and critique. And to David Sullivan for his police expertise. Big hugs and lots of love to Nurse Sarah, for sparing Bo too much pain with her medical details. I’d also like to thank the instructors at the Writer’s Police Academy for helping me “get it right”, especially when it comes to questions like “What does a dead body look like if it’s left in a Mexican drug tunnel for six months?”Also hugs to L.C. Chase, for creating such a lovely cover, and to Jerry L. Wheeler, who had the unenviable task of being my editor. More hugs and a bottle of wine for P.D. Singer, the formatting wizard at Rocky Ridge Books.

Huge thanks to the readers, who love Bo and Lucky and asked for more of their story.

I know, I know. You're wondering what I'm doing hanging around my blog when I should be working on the next book in the series: Redemption. 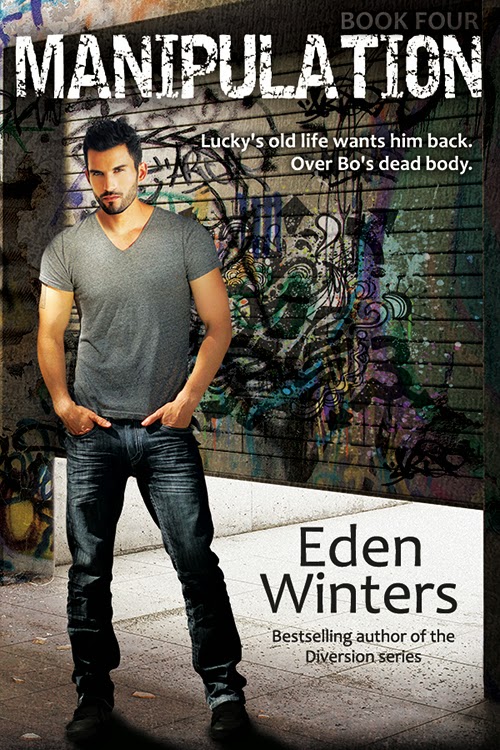 Lucky Lucklighter has a new life. His old life wants him back.

He traded trafficking for taking down criminals with the Southeastern Narcotics Bureau, and a drug-lord lover for a man on the right side of the law. Bo Schollenberger found the way past the thorny defenses of Lucky’s heart, and made Mr. I-Get-Along-Fine-Alone think about his and his closets, stevia in the sugar bowl, and a picket fence—with a good lock on the gate.

Now Bo is missing, and a voice long silenced asks, “Did you miss me?” Lucky must deal with a devil from his past to get Bo back.

And if Bo isn’t willing to come? A drug ring needs its back broken before flooding the US with a designer high, seductive and undetectable. But there’s a fine line between good and evil, and a truckload of temptation urging Lucky to cross.

“Victor Mangiardi hearing,” paid off in the form of a news article he hadn’t read before. He struggled to breathe even before the image came clearly into view. Victor, smiling, happy, and standing on the courthouse stairs.

His arraignment. This photo was taken at Victor’s arraignment. But he was laughing. An image came to mind of this same man in court, in rumpled clothes, disheveled and gaunt. During all their time together, Lucky had never seen his former lover looking less than perfect. Victor had even managed to pull himself together during the flu, while Lucky had lain in bed too sick to move. The haggard appearance in court had to have been an act to win the jury’s pity.

Here he was, with no apparent care in the world. Victor’s lawyer stood to one side, a uniformed cop on the other. Several other people trudged behind him, none of whom Lucky recognized, except for…
Lucky jabbed the magnifying button again and again. The enlargement distorted the face, but he’d know this man anywhere. It couldn’t be. It just couldn’t.

Standing a few feet behind Victor Mangiardi was none other than Walter Smith.

“But I thought you needed to speak with Mr. Smith,” the receptionist said as Lucky stormed past her desk.

“He’ll be in later this afternoon.”

Lucky jabbed the down arrow button on the elevator. “I changed my mind.”

Holy fuck! Walter and Victor. Walter swore there’d been no deal made to get Victor out of his charges, yet Victor didn’t seem at all worried in the picture. And the reason might have been who stood behind him, both literally and figuratively.

But Victor was dead. He’d hanged himself in his cell.

All the way home Lucky dredged up details he’d sworn to forget. He’d returned from a run to find certain items missing from the house he shared with Victor, the painting of Victor’s mother being the most noticeable. And damning.

And then there were airline tickets to Rio: one for Victor, one the feds led Lucky to believe was for another plaything Victor planned to drop Lucky for. Only after Victor died, at Lucky’s own trial, did the bastards reveal the passport made out in that name, with Lucky’s picture.

The feds had started closing in, and Victor planned to leave the country and take Lucky with him. As in most aspects of their relationship, he’d kept the details to himself. Besides, Lucky wouldn’t have willingly run and left his family behind. Victor hadn’t intended to offer a choice. Manipulative bastard.

They’d been arrested before they could leave. Or had they?

Lucky recalled the picture. What if Victor made the deal before his arrest? What if, instead of a drug trafficker and a narcotics agent, the men in the photo were merely actors? Walter made one hell of a leading man, as he’d proven time and again in boardroom showdowns.

Arranging a fake death wasn’t hard; Walter had done the same for Lucky. In fact, Walter suggested the plan.

“Fuck. What if he isn’t dead?” Lucky asked himself out loud. He waved an impatient hand at his landlady’s greeting and marched into his house. She sat on the porch much of the day. If anyone stuck anything in the mailbox, she’d know. She had to have seen who delivered the picture yesterday. And yet she’d lied about seeing anyone. With no postmark, the mail carrier sure hadn’t brought the damning piece of evidence. Never again would he trust Mrs. Griggs beyond fixing faulty plumbing and feeding cats.

He’d pack a few things, stay in a motel, and avoid all contact with the SNB until he figured out what was what. What about Bo? How did he figure into the equation? If Bo came to harm because of Walter…
Lucky dragged a duffel out of the entryway closet and charged into his bedroom. A few pairs of jeans, underwear, T-shirts. He crossed into the bathroom for his shaving kit.

Scrawled in red marker across his bathroom mirror: “Did you miss me?”

A face appeared over his left shoulder. A blur swung down. Blackness.

Now available at Rocky Ridge Books.
Posted by Eden Winters at 4:55 AM