At the Dreamspinner conference in March, I was filmed reading the "Crickinator!" scene from my shifter novel, Naked Tails.

Seth isn't your ordinary shifter, as the cover and blurb reveal. 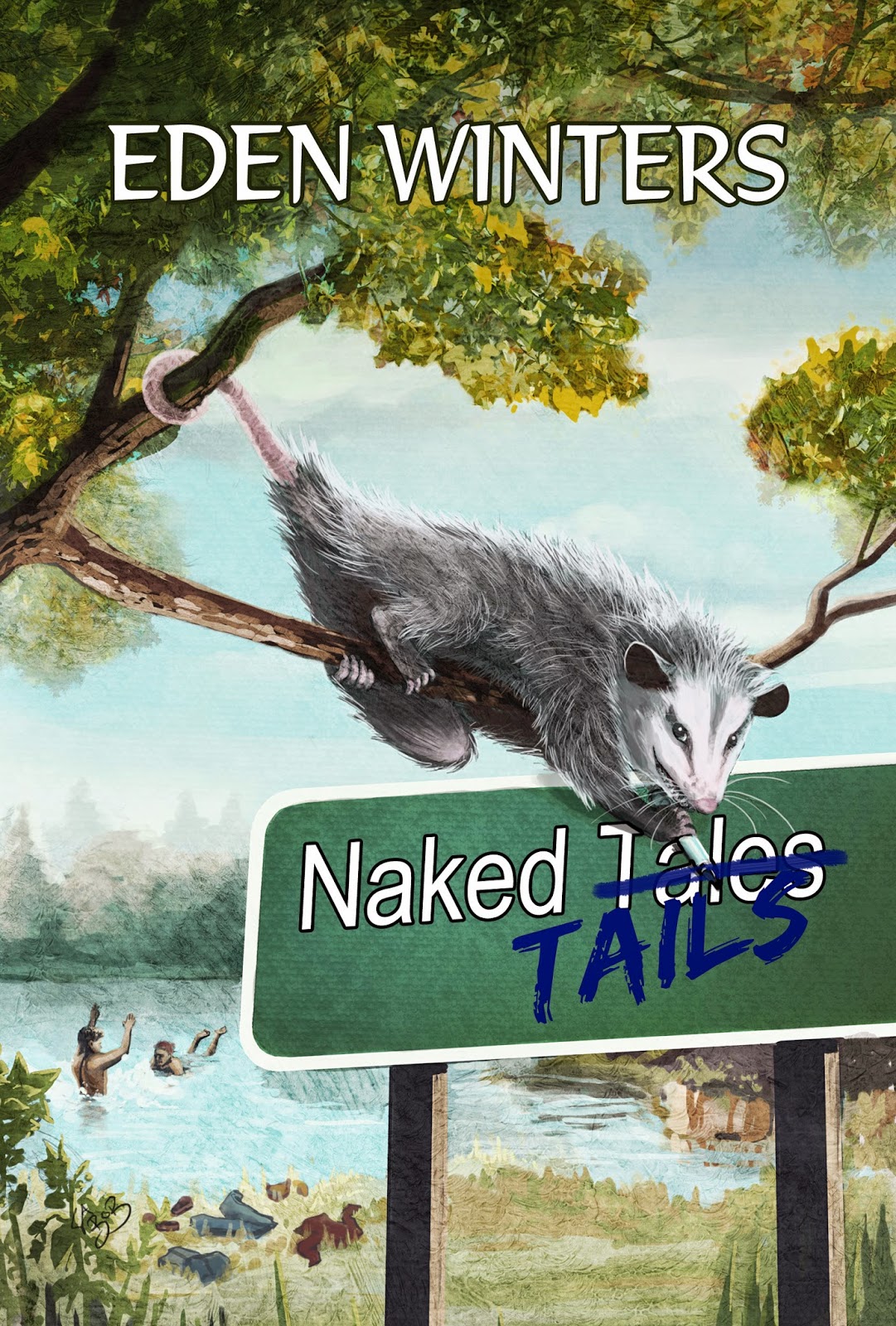 Want to know more? Get your copy today from Dreamspinner Press.

And because I've been told I have an accent (Really? Me?), here's the passage that I read:

NIGHT sounds Seth normally took for granted sharpened, and he wondered if real possums appreciated the difference. Wait! He wondered! He did a happy little possum flip, if somewhat awkwardly. He wondered! He had his human mind! On the edges of his consciousness, Dustin and Monica conversed before Dustin shrank back into the shadows, apparently satisfied. Monica hunkered down a few yards away, wary eyes sweeping the yard.

Chirp, chirp! What the hell was that? Seth scuttled around, searching the grass for whatever produced cheeping to give a foghorn a run for its money, volumewise. Chirp, chirp. A fat cricket sat a few feet away, singing to lure a prospective mate. Seth stared at the angular, skinny legs, only one thought in his head: Yummy! He pounced, as much as his cumbersome body allowed, catching the cricket unawares. Crunch, crunch, crunch. Oh! Like potato chips! Also like potato chips, one simply wasn’t enough.

Seth spotted another cricket and wobbled over, filling his mouth before his prey hopped away. Stupid cricket. The third and fourth proved equally easy.

I am the crickinator! Seth considered simply opening his mouth and ambling the length of the yard, scooping up insects like a whale netting plankton.

Eventually his seemingly bottomless belly filled, and he experimented with his new body. Locomotion wasn’t a problem if he simply moved without trying to figure out the mechanics. However, the moment he became aware of having four feet to contend with, he stumbled and fell. Should he place the two on the right in tandem, or right front, back left? Splat!

A chittering sounded in the general direction of Monica. Did possums laugh?

Oh! Worm! Seth pounced, squealing when his teeth sank into his own tail. Ow! That hurt!

After a while, he grew sleepy and headed for the house. He bumped his nose on the bottom step. How the hell did they get so high? Bouncing his front end lifted his paws an inch off the ground. He bounced again, and again, only succeeding in wearing himself out.

When he’d reached the point of giving up, Monica took pity and led him around the side of the house and underneath. An intricate possum highway existed under the structure, constructed of two by fours and sheet metal. On and on they rambled, entering walls and finally coming out under the bathroom sink.

Weary now, Seth slothed to his bedroom, where he plopped down on the area rug by his bed. He awoke to sunlight streaming through the window, itchy possum hairs scratching his bare human skin, and the icky sensation that something had crawled into his mouth and died. Wait a minute! It had! Several things, actually. Something scratchy hung from his lip and he wiped it away, only to come away with a cricket leg clinging to his hand. Yuck. Cricket.
Posted by Eden Winters at 3:36 PM