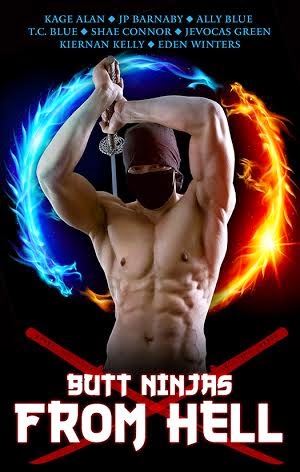 Here's an excerpt from my contribution: Hell is Where the Heart Is. Our hero (if you could call a demon that) has been given an ultimatum: Find a mate within twenty-four hours, or his demanding mother will pick one for him. Talk about the mother-in-law from Hell!

After an hour of false starts and a growing inclination to quit his search for someone to stroke his fancy, a high pitched squeal jerked Vik from his alcohol-induced stupor.
“Oh my God! Where did you get those fangs and crazy lenses?” A guy dressed head to toe in form-fitting black approached, the skin-tight fabric leaving little to the imagination. A pair of piercing eyes peeked out from an eye slit in the hood—glowing amber, lined with black. Lithe and a bit on the thin side, like Vik’s favorite singer, the guy reached out and stroked his fingers along Vik’s left horn. Oh. OH! Vik shuddered. Now if the man in black would just touch the tail he’d crammed into his blue jeans—maybe help get the kink out.
Apparently oblivious to Vik’s reaction, the guy gushed, “I had this friend, just a friend you see, nothing more, no matter how much he begged me to marry him. Anyways, he got his fangs off an Internet site. They’re the kind you have to fit over your own teeth.” He pantomimed, pushing against his top teeth. “They looked real, but one popped off at the wrong moment, if you get my meaning.” He punctuated his words with a wink and a nudge. “Took us days to find it. Thank goodness it was in the carpet under the bed and not, well, you know.”
Wow. How did all those words escape that puny body without the man so much as taking a breath? Damn. He could probably go deep and stay there a long time…
“Anyhoo, I’m Dillon. I live downstairs.” He removed a pair of gloves and held out a delicate-looking hand. Vik took the offered appendage gently, afraid of crushing a bone. “Not like that,” Dillon complained, “I’m not gonna break.”
Vik squeezed harder.
“Ahhhh!” Dillon wailed, jerking his hand back.
“What…I’m sorry. You said…” Oh shit. Time was running out and Vik had gone and hurt the first prospect to talk to him.
Dillon threw back his head and laughed. “Gotcha!”
“No you don’t, not yet.” Oh Home. Stupid, stupid, stupid. Why not just come out and say, If I don’t find someone tonight my mom’s gonna match me up with a demonic nutcracker? The lamest pickup line ever spoken worked.
“Oh, I have faith in me.” Dillon winked. “What say we blow this Popsicle stand?”
“Blow who?”

Be sure to stop by Kimichan Experience Book Reviews for the first leg of the Butt Pirates From Hell blog tour, featuring Yours Truly and more about Vik.
Posted by Eden Winters at 3:53 PM