Newly Re-released and Cheesier Than Ever! Galen and the Forest Lord

Let's face it: sometimes an author just wants to have fun. I hope you'll have enjoy reading Galen and the Forest Lord as much as I loved writing it. 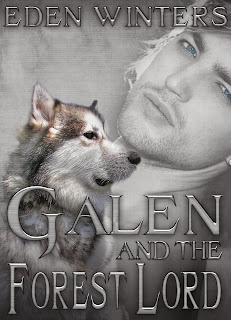 Lord Erik rolls his eyes at the prophecy that says when human hands deliver a babe to the forest, he’ll meet the mate destined to reunite forest folk with humankind. What interest has he in a child? The handsome human who brings the babe is another matter entirely, and little things like destiny and his own bumbling won’t keep Erik from claiming Galen as his own.

A tree trunk’s rough bark bit into Galen’s back, the massive oak cutting off any hoped-for escape. He swallowed hard, wide eyes transfixed by the glowing orbs of a least a dozen wolves fanned out around him. Having been taught to count to twelve by his uncle, who’d often sent Galen to market to sell eggs, he knew there were at least a dozen. Any number beyond twelve was deemed irrelevant by the farm folk, and probably better off for the not knowing where wolves were concerned.

Wasn’t this the point in his dreams where the forest lord swept in, saving Galen before taking him away from farm life forever?

Two shaggy predators crept closer while the others held back. One of the two, a particularly large example of wolfhood, growled. Galen imagined it egging the other on, “It’s just one puny human! Kill it!”

“Me go check?” the second wolf, a much smaller male, whined. “You’re the Alpha Bi–”

The larger wolf cut him off with a particularly vicious snarl. “Don’t you dare call me that!”

“B…b…but it’s the customary title! Passed down through generations.”

The she-wolf’s long, pointed nose nearly touched the other wolf’s, and she grrr’d deep and low. “It may be the customary title, but I swear, if you call me Bitch one more time…”

Galen watched the exchange between the two wolves, imagining they were fighting over which got the first bite.

So terrified he could scarcely get the words out, he stammered, “I… I… ha…have a b…ba…babe with me. The forest lord grants safe passage to any with a b… ba… babe.” When his captors didn’t immediately scamper off into the woods, uttering the wolf equivalent of “Why didn’t you say so?” he added weakly, “Or so I’m told.”

The larger, female wolf gave a nasty sounding rumble from deep in her throat. Galen heard, “Dibbs on the kid!”

The smaller male wolf rolled his eyes and lolled his tongue. It looked to Galen like a flea was troubling a place he wasn’t permitted to scratch in public.

An enormous black wolf pushed past the encircling furry bodies to join the front two, with a growl even more threatening than the others’. In all honesty, compared to the new arrival and the female, the smaller male didn’t look dangerous at all. For a moment, temptation goaded Galen to jump and shout to see if it would run.

The new wolf approached cautiously, a monstrous creature that reminded Galen of the paw prints he’d found earlier on the path. The beast eyed Galen with keen interest. The female growled again, defending her claim, in Galen’s eyes.

Actually, the she-wolf told the newcomer, “Erik, I don’t care if you are kin, touch the child and die!”

In rather meek and mild-mannered tones, for a wolf, Erik replied, “Yes, Aunt Eydis.”

“That’s a human, you know,” the female pointed out.

“Of course it’s a human! I can smell it from here. It’s not like I haven’t seen them before.” He lifted his nose into the air for a good sniff. “It smells rather ripe, in my opinion.”

His father’s litter-mate glared with narrowed, yellow eyes. “That’s the babe he carries. Needs a good changing if you ask me.”

When Erik didn’t reply, she repeated, “A hu-man,” as though speaking to a cub. A rather young, rather dim-witted cub. “A human carrying a baby, invoking the name of the forest lord.”

“Oh!” Erik replied, the candle wick igniting. “But shouldn’t the human babe we expected be this lad’s age by now?” He pointed with his snout to Galen. “Took his time in getting here, didn’t he?”

The she-wolf gnawed a cockleburr from her paw. “You know how prophecies are.”

“He could still be a criminal,” the smaller male suggested. A hint of pink tongue swiped at his muzzle.

“Don’t you think about anything but eating?”

“Well, my mate is pregnant,” the small wolf replied, with self-satisfied smugness.

Erik shifted his gaze back and forth between Twin One and his aunt. Neither budged. “Fine! I’ll go!”