Mention was made in Diversion and Collusion that protagonist Lucky enjoyed fantasy and role playing. In this excerpt from Corruption, the third book in the Diversion series, Lucky and his partner, Bo, get to combine a little fun and games with an assignment from an undercover class.


Darkness and shadows, the perfect concealment for mischief in the making. A group of teens huddled together on a street corner, plotting how to get into juvenile detention, no doubt. “Don’t you kids have a curfew?” Lucky growled in passing, tuning out their clumsy comebacks. No matter what they said, he’d heard it before. He turned up the collar of his jacket and rammed his hands into the pockets. If things didn’t turn out quite like he hoped tonight, he might be calling his boss to get him out of jail. Would Walter buy the excuse of homework?
The teens’ laughter and taunting faded with each footstep, replaced by the thrum of a bass guitar and the rat-tat-tat of drums from the bar, slightly off-tempo. Amateur night, by the sounds of it. Extremely amateur.  Lucky rounded the next corner into a concealed alleyway, the neon of the Spencer’s Bar sign casting a rainbow glow. A dead end. Not good. And two doors opening on either side. A perfect ambush spot. Or a good place to hide.
Shuffling footsteps and a quiet “Uh-hmm” brought him back to the here and now. Oh yeah. The reason he braved a cold night without a proper jacket waited ahead. A shadowy figure leaned against a wall at the back of the alley, eyes glittering in the low light. A streetlight illuminated the fog of breath the man exhaled.
Fuck me! Lucky froze. Damn but he’d dreamed something like this before. Tousled hair, a come-out-and-play-I-know-you-want-to smile. A pair of tight jeans emphasized a bulging crotch, and the man turned to allow Lucky a peek at a perfectly shaped ass. A denim jacket gaped open in front to reveal a bare chest, sparsely covered in a dusting of dark hair. The glimmer of a wallet chain led from belt to hip pocket. I’m hot and I know it radiated from the tip of the man’s gelled-up hair to the soles of his boots. Holy fuck! Lucky’s cock began to fill.
Unable to resist, he ran his fingers through the enticing wisps of chest hair. The man flinched back, biting down on a laugh. “Cold!” he complained.
“I’ll keep you warm,” Lucky replied, stepping close enough to share some body heat. Oh, yeah, he’d light a fire to warm them both for days.
“It’ll cost you.” Bo reclined back against a brick wall, grin gleaming in the semi-darkness. Oh fuck, yeah.
Lucky reached down to rearrange his highly interested cock. “How much?”
“Depends on what you want.” Bo ran a hand under his open jacket and slid it slowly down his body.
“What’re you offering?”
“Everything.” The barest tips of Bo’s fingers dipped under his waistband.
“What’s everything?” And did it involve getting naked in a filthy alley?
“You know. Ev-er-y-thiiiiing.” Bo plunged his hand into jeans so tight it was a wonder anything besides the man’s ample package fit.
Two could play that game. Lucky leaned in and wafted a breath across Bo’s jaw. “No, I don’t know. Why don’t you tell me?” A tongue flick elicited a gasp. Lucky grabbed Bo’s wrist and forcibly removed the hand from his jeans, then palmed the fascinating, denim-covered firmness he found there. Oh yeah, the little hellcat enjoyed this too. Undercover Cop and the Rent Boy became Lucky’s new favorite fantasy.
“Tell me what you want,” Bo murmured. 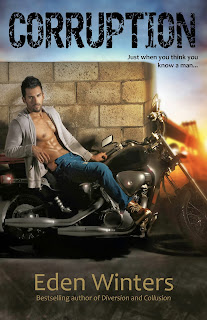