While author interviews are fairly common, there are so many others supporting GLBT fiction: readers, publishers, artists, editors, reviewers, and more. Without them, where would our genre be? Quite frankly, I find them fascinating, and I’d like to learn more about them.

That said, today I’d like to introduce someone I met online several years ago, a blogger who’s brought many wonderful books, art, and movies to my attention, and who’s showcased notable GLBT folks I might not have otherwise known about. Her “couples” series is a favorite of mine. Allow me to introduce Elisa Rolle, blogger at “My Reviews and Ramblings”, and the host and mastermind behind the annual Rainbow Awards.

Hi, Elisa. (Squee! Look, y’all, it’s Elisa Rolle!) I must admit that I’m a huge fan of yours. Your site has inspired me, helped me establish myself as a writer, and taught me so much. Tell me, why did become a reviewer, and how did you become involved in GLBT fiction?

I will answer first to the second question, I have always had an interest in English literature and while reading the classics, I stumbled upon Maurice by E.M. Forster; I loved that book, I was 13 years old, but it wasn’t until my late twenties that I had the chance to read another Gay Romance. I was in an Italian Yahoo Group promoting mostly Paranormal Romance authors not yet translated into Italian, and one member proposed Crossing the Line by Stephanie Vaughn; no other aside from me was willing to read it, and I not only loved it, I discovered there was a genre, Gay Romance, I wasn’t aware of. I was hooked. But at the time, 2005, there weren’t review sites for this genre, the reviews you could find were few and lost among thousands and thousands of other reviews, mostly of Paranormal/Erotic heterosexual romance. So I started to post my thoughts on my Journal, and people started to call them reviews; I told, no they are not, but apparently, no one believed me!

I adore your series of long-term couples. What was the inspiration for the series?

I have a friend, Vincent Virga, who met his partner, James McCourt, in college when he was 22 (it was 1964). Almost 50 years later, they are still together, and still deeply in love. When I was reading about how difficult it was in the past for a gay man to find happiness, I always thought how lucky Vincent and James were, but also how much they had to love each other to succeed where most didn’t. And then, I often heard gay couples say they didn’t have a role model, and I want to give them the proof there are many. It’s in a way an “It gets better” project, only for couples instead of teenagers (even if, I think, also teenagers need role models).

What inspired you to create the Rainbow Awards?

I always used Romance Awards to find my choice of readings, and when I started reading Gay Romance, again, the few awards devoted to LGBT literature weren’t really focused on LGBT Romance; most of the time, the romance categories were mixed together with other categories, and sincerely, the novels winning the Romance awards weren’t really “romance”. Romance has its rules, uplifting ending, love story, etc. Second, most of the Gay Romance I was reading were in ebooks, and those awards didn’t consider them. So I launched the Rainbow Awards, more like a gathering of romance readers talking together. And after one year also non-romance authors were interested in submitting, and then publishers, and then other categories like Lesbian, Bisexual, Transgender… Last year I was approached by the Rainbow Chapter of the Romance Writers of America: they were interested in joining force cause, basically, the Rainbow Awards were THE LGBT Romance Awards, and there was no sense in having another one. I agreed with the only condition to maintain the all-inclusive nature of the Awards, that at today, is way more than only romance.

With the Rainbow Awards Cover Contest, you’ve creative a fun, interactive event. You make it look so easy. Tell me, how many covers were entered this year, and however did you keep them all organized?

The Cover Contest is basically an all-year round involvement, the eligibility period is from August to September, and each month I store the covers: I browse Amazon, the major LGBT publishers, plus self-submissions. More or less 200-250 covers per month, so in the end, we browse 2400-3000 covers. I consider the cover contest a way for everyone to be involved in the Awards, the poll are open to public, but I have also a devoted jury, and I want to pay my compliments to Dylan Rosser, that other than being an AWESOME photographer, is in the Cover Contest jury since the beginning, and is always the first to reply when I send out my call to the Jury. He manages to pick, more or less 5 covers out of 200, and are always the best of the best.

The Rainbow Awards. It’s grown so huge. How do you manage it all?

It’s not easy, if you ask the Jury they will probably consider me like the evil general trying to push the army to the extreme. I tried to let it go a little, but in the end, it appears the Jury (more than 150 readers) have a direct contact with me, and if I’m not in the chain, they got lost. So now the Awards last 9 months out of 12 and most of my time is spent for them. My reading has taken the toll. I contacted publishers and authors to let them know I’m no more able to read as much as before, but I think the Rainbow Awards deserve all the time I’m devoting them.

What’s next? Where do you see the Rainbow Awards a year from now? Five years from now?

For the first time this year there was a submission fee, and as condition to have it, I asked for the majority of the fee to go to charity. We collected more than 6,000 dollars that we will give to the Aly Forney Center in NYC and to Colors in LA. I hope for the next years we will be able to raise always more for the charity projects. So 5 years from now? I hope that other than providing good reading inspiration we will be helping the LGBT community.

You obviously adore fiction and give a lot of thought to your reviews. Have you ever considered writing your own stories?

I have some plot bunnies in my mind, and authors told me they are nice, but I don’t have a literary background, I studied economics, so I’m not able to put down those ideas. The strange thing is that, I imagine them in my mind in English, but obviously I’m not skilled enough to write then down in that language, and when I try in Italian, is not the same.

What word of advice would you give a new writer?

To be coherent, and to not follow the flavor of the month. They need to have a strong personality, something making them unique. And to be careful online, there are a lot of traps.

Enough about your site, tell us a bit about Elisa Rolle. What is one thing about you that might surprise your fans?

I was around for the past 7 years, and maybe that is already surprising enough? Recently I heard an author saying the first M/M review only site was launched in 2008; well that is not correct, my LiveJournal, at the beginning all devoted to M/M, was launched in 2006. Only recently I started to review also some Lesbian, Bisexual and Transgender, unfortunately having reduced a lot my reading capacity, I’m not able to read many of them.

What other hobbies do you enjoy besides reading and blogging?

Travel and Photography. Give me a new country, a travel guide book and a camera, and you are making me very happy. If I don’t manage to visit a new place every 2/3 months, I suffer from abstinence.

Who’s been the biggest influence in your life?

My father. He was a wonderful man, very devoted to his family and friends. Cancer got him when he was only 54, and that was almost 20 years ago, but I still miss him every day of my life.

You live in Italy (wow!). What places off the beaten path would you recommend to anyone planning to visit your country?

Actually my city is a good suggestion, Padua was founded well before Rome, and it became a Roman municipium; it was destroyed by Barbarians around the turn of the first millennium, rebuilt to become the city of S. Anthony and at the same time, one of the first laic university in the world (it’s currently the second oldest University in the world). Plus, we have the most important Giotto’s fresco, who is at the basis of the perspective theory in painting. Oh, and I was almost forgetting, Padua is the city were Shakespeare set The Taming of the Shrew, and the movie with Elizabeth Taylor and Richard Burton was indeed filmed here.

Would you tell us something about your day to day life?

It depends if I’m on a project or not, I’m a software consultant, so I spend more or less half my time abroad, living in hotels; if not, I have a desk job, 9am-6pm. I’m lucky enough to have my mother at home, taking care of the house and of the daily chores, so when I’m back home, I can devote myself to reading and blogging.

I understand that you’re about to visit my area, the American South. What places do you have on your agenda that you’d like to visit while you’re here?

2 days in Ashville, 4 days in Charleston (and around), 2 days in Savannah, and then Atlanta. In Charleston and Savannah I booked historical guest house, both of them of the beginning of the XIX century, and I will stay in the city center. Are those good choices?

Excellent. Might I suggest that you visit The Chocolate Lounge while in Asheville. It's one of my favorite places ever!

I’m really looking forward the GRL convention, I have recently been in a diet regimen, and managed to go back to the size I was in college, so I’m able again to enter in my collection of Vintage gowns, so I will bring some to the convention. They are fabulous, trust me!

Thank you so much for putting up with my nosy questions. Hugs. I can’t wait to see you at GRL. 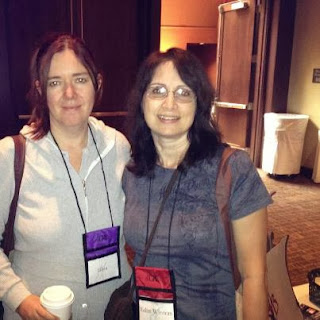