And a drum roll please... Introducing the latest installment in the Diversion series: Corruption

Book three in the Diversion series is set to release in less than a month. All you Bo fans? The man gets a chance to step out from behind Lucky and shine in this one, though the story is still told from Lucky's POV. And get an eyefull of Bo on the cover! 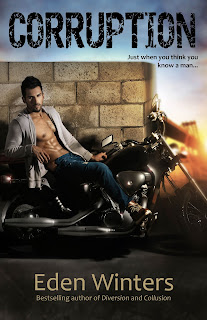