I love a variety of books, but the ones I crave, the ones with a special place in my heart, the ones I reread over and over, are the ones that entertain me, make me think, and teach me new and interesting facts without my even realizing it. Thorns is one of those books.

With Thorns, author Feliz Faber has done for horseracing what she did for falconinig in her book City Falcon: taken a lesser known topic, made it relevant to readers, made if fascinating, and with a deft hand wove in a love story. Only, we get not one sweeping romance here but two, and a rich background steeped in intrigue. Oh, and did I mention that even the most minor of characters is fully realized?

From California to the French countryside, the author is our tour guide, leading along through quaint pubs, to the inner workings of a horse training farm, and gives us a peek into the lives of four fascinating, complex men. Ah, but I've come to love Will and Francis, Louis and Nic, and will be revisiting them soon.

What? You haven't read it yet? Be sure to hurry on over to Stumbling Over Chaos and get your name in the hat for a copy of Thorns.

That said, please welcome Feliz, who gives us more insight into racing, her characters, and how this novel came to be.

Someone recently referred to my new novel, Thorns, as "Dick Francis Slash"—which pleased me greatly, because of course my book is a homage to one of my favorite authors to whom I owe hours  and hours of unalloyed reading pleasure. In fact, you can hardly say “mystery” and “horseracing” in one sentence without mentioning in the same breath Dick Francis, the doyen of crime novels that smell of thoroughbreds, competition and British stiff-upper-lippedness.

Dick Francis, for those who don’t know, used to be a steeplechase jockey before he retired from horseracing after an accident in 1957. Taking the phrase “write what you know” to heart, Dick Francis then proceeded to write mystery novels set around the world of horses and racing. His first novels often featured horseracing professionals of some kind: jockeys or ex-jockeys, trainers, bloodstock agents, veterinarians and so on. But as his work became more popular, his heroes acquired other professions, too. It never ceased to amaze me who all he managed to link to the world of horseracing: tax accountants, painters, meteorologists, pilots, wine merchants, jewellers, travel writers, architects, insurance agents, glassblowers, and even a Secret Service Agent (my personal favourite of Dick Francis’s heroes, btw.). And those people’s jobs were no mere props; detailed research about their respective regular professions made them real.

As diverse as their professions is the number of crimes they get involved in, often unexpectedly. Murder, yes, but also doping, kidnapping, horse theft, sabotage… Dick Francis’s specialty are unexpected plot twists that often hit the reader as hard as they do the main characters, sticking the latter into a dire dilemma. It’s breathtaking how Francis always manages to get the poor guys out of it again (albeit often not unscathed).

Except for horses, Dick Francis’ heroes, whatever profession they may pursue, share some common traits which add to their charm, at least as I’m concerned. Mostly, it’s the fact that they are ordinary people who have extraordinary things happen to them. Facing dire threats to themselves or their loved ones, those common men outgrow themselves fighting powerful enemies, always by tapping into hidden strengths inside themselves they didn’t even realize they had until they needed them. Dick Francis’s heroes are no invincible supermen. They see what needs doing and do it with determination and silent endurance. Resilient is the best word for it, I think. Who wouldn’t want to be like them?

I, for my part, always wanted to write a character who, like a Dick Francis hero, is an ordinary man, unexpectedly and inauspiciously drawn into something big that changes his whole life. So, along came Will Yeats. It seemed natural to place him—and his lover—before the backdrop of the horseracing world.

Yes, Dick Francis was a big influence on my writing, on Thorns, and its as of yet unfinished prequel/ spinoff “Run for the Roses”, which will tell Nic and Louis’s story.

Here’s to you, Sir. Thank you for everything. 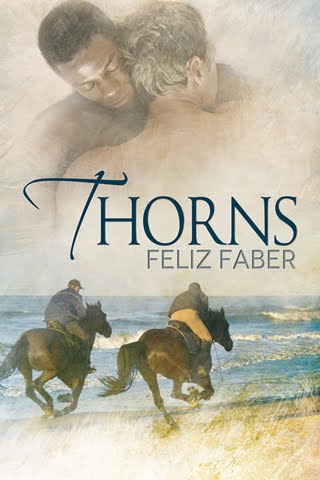 How can love between two men possibly be responsible for a horse’s death during the Kentucky Derby? Reporter Will Yeats wants to know the truth.

Seventeen years ago, a love affair between a jockey and a horse trainer and a tragic accident on the racetrack scandalized the horseracing world. But Nic Pithiviers and Louis Meerow seem to have no desire to set the record straight: they refuse the interview and send attorney Francis LeBon to question Will’s motives.

Francis has a special place in his heart for Nic and Louis, who taught him to take pride in himself as a gay man, and he’ll stop at nothing to protect them from a gossipmongering reporter. However, Francis doesn’t expect the reporter’s honesty and genuine determination to exonerate two men falsely accused… or the growing attraction to Will he feels.

While visiting with Nic and Louis at their horse training center in France, Will uncovers a web of intrigue, secrets, and old lies, and he unwittingly sets a series of perilous events into motion that not only threaten to destroy his budding relationship with Francis, but Nic and Louis’s decades-long commitment as well.


Find Thorns at Dreamspinner Press in ebook, and in print.