Good morning, y'all (evening, afternoon, whatever it is in your neck of the woods).

Please welcome Mickie B Ashling to the site today, and help her celebrate the re-release of her novel Horizons.

About Mickie B Ashling
Mickie B. Ashling is the alter-ego of a multifaceted woman raised by a single mother who preferred reading over other forms of entertainment. She found a kindred spirit in her oldest child and encouraged her with a steady supply of dog-eared paperbacks. Romance was the preferred genre, and historical romances topped her favorites list.

By the time Mickie discovered her own talent for writing, real life had intruded, and the business of earning a living and raising four sons took priority. With the advent of e-publishing and the inevitable emptying nest, dreams were resurrected, and the storyteller was reborn.

She stumbled into the world of men who love men in 2002 and continues to draw inspiration from their ongoing struggle to find equality and happiness in this oftentimes skewed and intolerant world.

Her novels have been called "gut wrenching, daring, and thought provoking." She admits to being an angst queen and making her men work damn hard for their happy endings.

Mickie loves to travel and has lived in the Philippines, Spain, and the Middle East but currently resides in a suburb outside Chicago. 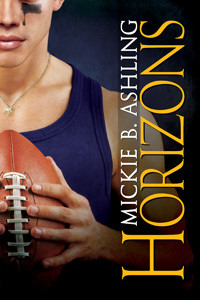 Horizons-Book One in the Horizons Series
Twenty-three-year-old Clark Stevens, a popular wide receiver with a potential NFL contract, has a few problems. He's got a jealous girlfriend, a narrow-minded and controlling father, an attention problem, and an unexpected and powerful attraction to the trauma doctor—the male trauma doctor—who treats him for a broken bone.

Dr. Jody Williams is getting some really mixed signals. He can't ignore how much he wants Clark, because it's obvious Clark feels the same way. For the out and proud doctor, the solution seems very simple. For Clark, it's not! His world is not gay-friendly, and the obstacles he's faced have led him to deny his sexuality for years.

It's the Super Bowl of disasters, no matter how you look at it. In the end, Clark has to decide if he's going to stick with the only life he's ever known or take a chance on a new one with Jody.
Excerpt

JODY and Lil sat on the patio of the Yank Sing restaurant at the Rincon Center in San Francisco. The empty plates, piled high on their table, created a testament to the mountains of dim sum they had consumed.  They finished their meal with the delectable buns stuffed with a sticky,
sweet yam concoction.

Jody sipped his cup of black tea, sighing with satisfaction. “That was amazing. Thanks for talking me into this.”

“You’re welcome, sweetie. We need to do this more often.”

“I don’t think my stomach can handle this on a regular basis.”

“Oh, you know we’ll be hungry again in an hour.”

“This will have to hold me for a while. I’m meeting Clark at five for another session.”

“Of what?” Lil asked pointedly.

“Of tutoring,” Jody answered, doing his best to keep his face from revealing anything.

“Honey, I’ve known you for a long time, and that look can only mean one thing. When did he cave?”

Jody rolled his eyes, annoyed at being found out so soon.

“Tell me!” Lil squealed, jumping up from his seat. “Was it bliss? Who made the first move?” Lil bent forward and whispered, “Is he hung like a horse? I want details!"

“Lil,” Jody barked, looking around to see if anyone was observing them. “Keep your voice down.”

“Come on! Stop acting like a prude and talk to me.”

Jody fidgeted, uncomfortable under Lil’s gaze. They’d always shared information in the past, but somehow, this was different.

“This is more than just sex, isn’t it?” Lil asked.

“You’ve really fallen for him,” Lil exclaimed. “I can’t believe it.”

Jody sipped his tea in silence.

“Sweetie,” Lil said, switching persona instantly from raging queen to serious architect and friend. “You need to forget about him.”

“You’re doing this to yourself again.”

“What?” Jody sighed, knowing exactly where the conversation was headed.

“Don’t compare this relationship with the other one.”

“Why shouldn’t I? You’re going into this with your eyes wide open, knowing he’s a closet case with major issues.” Lil’s normally cheerful face looked troubled. “Jody, this will not have a happy
ending.”

“But he’ll deny you and walk away, eventually. Once he’s gotten the itch out of his system, he’ll go back to being Berkeley’s number one het stud.”

“He’s not like that. He’s really struggling with his sexuality.”

“And you want to be his first experiment? You’re fucking nuts!”

Jody bit his lip and squeezed his eyes shut, determined to stay cool.

“You need to walk away!” Lil implored. “Now, before you’re in too deep.”

“I know,” Jody whispered, shaking his head. “I’m fucking crazy about him.”

Lil sat back in his chair and gaped at his best friend.

“What? Don’t tell me you’re all out of advice.”

“I’m astonished at your eagerness to get your heart broken again,” Lil remarked. “You’ve always had a penchant for lost causes, but this is too much."

“Sweetie, you really need to think this through. He’s not only in the closet; he’s got a father who’s demented, according to the rags.”

“You know how I love football.”

“Yeah, yeah, you jerk off to the pictures.”

“Really, Jodes, give me some credit. I actually watch the games and read all the commentaries. Then I jerk off.” His queen-voice returned.

Jody grinned. “And the point of this is?”

“Many articles about Clark have mentioned his father. They say he’s controlling and rules his son’s life. A lot of teams who would normally be interested in signing him up are shying away from him.”

“Oh, don’t get me wrong. There are still a lot of people interested and willing to overlook his dad. However, I don’t think they’ll overlook daddy and  the gay factor—that would be a lethal combination.”

“Lil, this is 2003, not the eighteenth century. Gay is very fashionable right now.”

“Not in football, and not in his dad’s world. You’re opening yourself up for a massive dose of heartache.”

“Oh my God! Has he even talked about coming out? Did he say he loves you?”

Lil shook his head. “Jody, get away from him while your heart is still in one piece. It’s taken you years to get over Rick. I don’t think I have the strength to do that again.”

“It won’t be like that. Now, stop being a drama queen and ask for the check. I need to go.”

“Wait,” Lil reached out and stopped Jody from leaving. “Throw me a bone at least?”

Thank you, Mickie, for joining us today, and congratulations on your new release!
Posted by Eden Winters at 3:19 AM