Just as I'm putting the finishing touches on Corruption, the third installment of the Diversion series, in comes a lovely four and a half star review for its big brother, Collusion, the second book in the series.

Reviewer Lydia had this to say:

The author brings the readers another great mystery with this newest case that could have been taken from the headlines. The case has a few twists and turns, keeping the reader entertained. It brings to light some hidden parts of our heroes that help flesh out their characters. As the author wraps up this story, I was surprised by how everything comes about, but not by the way Lucky ends up taking things into his own hands.

This was a great follow up, and I love the way the author has these two declare their feelings for each other. Fans of Diversion need to make sure that they pick up Collusion, while those who have not yet read anything by Ms. Winters should give her stories a try. 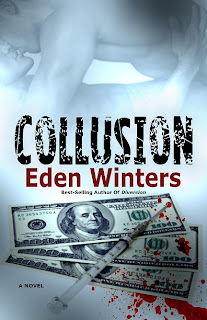 Find Collusion at Amber Allure  (and conveniently on sale!):