Some of you may have known that I've been taking an editing course for my own edification and to become a better beta. My final project in the course is to take a look at my very first book, The Telling, from the point of view of an editor.

Once I'm finished, I'll be republishing the story in a (hopefully) better and less error-ridden format. But... there's more. A dear friend has also been taking classes, in how to format print books. You see, over the years I've had several folks ask me for print copies of The Telling, and to be honest, I wouldn't mind one myself. A reader even offered to do the necessary formatting just so they could have a personal, signed copy.

If all goes well, soon a new improved version will be available, and in print for those who prefer "hold in your hands" books. After taking the editing class, I'm sure I'll cringe when I look at the file, because I've learned a lot in the time since I wrote the story. I'm not changing the storyline, however, merely editing. And there's a new blurb! Don't worry, I'm not changing the cover--it's too perfect as is. Thanks Jared Rackler, of Jared Rackler Designs. 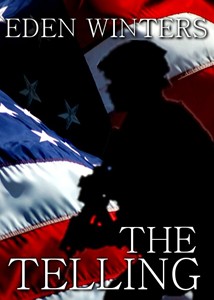 Time in Iraq cost Michael Ritter some of his hearing and a friend whose death he feels responsible for. He'd left home hoping to escape a dull, small-town life, only to return four years later, lugging a duffle full of personal demons.

Michael’s biggest battle lies ahead, and he’ll need all the help he can get to find his way in a world where he no longer fits in. Jay’s not sure where he fits either, but it could be next to the war-torn soldier in need of his strength.

For those who aren't aware, The Telling is available as a free download from ARe, as well as a short sequel, Night Watch.
Posted by Eden Winters at 4:16 AM